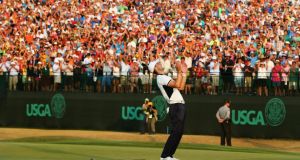 Martin Kaymer of Germany celebrates his eight-stroke victory on the 18th green during the final round of the 114th U.S. Open at Pinehurst Resort & Country Club, Course No. 2. Photograph Lecka/Getty Images

As Germans celebrated a 4-0 World Cup win over Portugal and welcome news regarding the health of Formula One legend Michael Schumacher, one major sports story appears to have gone largely unnoticed - a first U.S. Open golf title.

Martin Kaymer’s eight-stroke victory in North Carolina on Sunday was greeted with widespread praise within golfing circles, but the 29-year-old’s runaway triumph barely registered in soccer-mad Germany as the World Cup kicked off in Brazil.

“I feel nothing about his win... no sorrow, no happiness,” said Berlin accountancy firm employee Anne Ihle, adding that Kaymer’s victory had been “buried” in an avalanche of news about Germany’s bid to end an 18-year soccer title drought.

It was “bad timing”, said Christian Hansel, a 38-year-old product manager. He was not a golf fan but did remember Bernhard Langer, who along with Kaymer is the only other German to have won two majors, with Masters titles in 1985 and 1993.

The top-selling German daily Bild, which runs a “winner” and “loser” column on its front page, put Kaymer in both categories on Tuesday, remarking that “Germans are only talking about the Schumi-wonder and the start of the team’s World Cup bid”.

On Monday, seven times Formula One champion Schumacher, who suffered severe head injuries in a skiing accident last year, had come out of a coma and was transferred to a Swiss medical centre, officials said, without giving details of his condition.

Despite the other big stories, the German golfing community did pay attention to Kaymer’s win, according to Timo Schlitz, who covers the sport on the Golf.de website, telling Reuters that traffic rose substantially during the U.S. Open. German Golf Association chairman Marcus Neumann added that the lack of media attention would not diminish the scintillating return to form for Kaymer, whose rise to the number one ranking after winning the 2010 PGA Championship proved short-lived.

“For the golfing world itself, it doesn’t matter; for Kaymer it doesn’t matter. He will pass into golf history and in a few years nobody will talk about it coinciding with the World Cup,” Neumann told Reuters.

He believed that Kaymer - who himself wanted to be a professional soccer player - would be rooting for his friends on the German squad, like Bastian Schweinsteiger, who sat out Monday’s game, and Lukas Podolski, who tweeted about Kaymer’s “legendary performance” just before the match against Portugal.

Kaymer is due to play at the BMW International Open in Cologne next week and despite the tournament taking place during the World Cup, Neumann still expects to see an increase in public and media interest thanks to his U.S. Open victory.

“The parking lots in Cologne are going to be crowded with spectators,” Neumann said.

1 Barcelona in crisis as six board members resign in protest
2 My favourite sporting moment: When Ireland rocked Kingston and rolled Pakistan
3 Ireland boss Stephen Kenny: ‘I’ll do things my own way. Put it that way’
4 Andrew Conway diary: Nailing the wheelie bin challenge on the double
5 GAA to hold remote special congress to help decide fate of 2020 Championship
Real news has value SUBSCRIBE
Crossword Get access to over 6,000 interactive crosswords