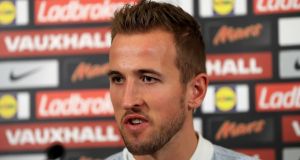 Harry Kane has urged his England team-mates to keep their cool in Friday’s eagerly anticipated game against Scotland, echoing the sentiments of the interim manager, Gareth Southgate, ahead of the World Cup qualifier at Wembley.

On Monday the squad watched a video montage put together by the English Football Association, on Southgate’s request, featuring clips from previous matches between the sides. There is an eagerness within the England set-up that Scotland do not have a better understanding of the sporting enmity that exists between the nations, though that comprehension must be followed up with proper focus on Friday night in a fixture that has long been sold out.

Asked if emotional control will be control against the Scots, Kane said: “Definitely. You don’t want to get any silly bookings early on and end up getting sent off because, in this type of game, you need all your men out on the pitch. Of course there will be tackles flying in, and a lot of battles and duels, but that’s what it is all about, so you have to keep a cool head but still have that passion. All we can do is fight as a team and talk to each other when needed to keep everyone going.

“We can all feel the buzz around here [at St George’s Park] and the media and how much it means to everyone. We want to go out there and win the game, that’s all we can do. We want to make sure we send the fans home happy with a good result and, hopefully, a good performance as well.

“We’re definitely up for the game and we can’t wait. We have to use the atmosphere to our advantage. We have to use all the positive energy and that passion to win the game.

“We had a meeting last night where the manager showed us a montage of previous games, and it’s great to look back just to feel the importance of the game for everyone. We know what it means. Gareth obviously knows what it means after playing back at Euro 96, and we’re looking forward to it. It isn’t like another game where, if you lose, it doesn’t matter and you don’t hear about it too much. This one . . . we know the Scottish players, we have Scottish friends who will make it heard if they beat us, so we obviously don’t want that and we’ll do all we can to try to win.”

Kane, who returned after a seven-week absence with an ankle injury for Tottenham Hotspur’s draw with Arsenal in the north London derby on Sunday, was one of nine players excused training at St George’s Park on Tuesday, with Southgate not taking any chances on fitness. The striker’s club-mates Kyle Walker, Danny Rose and Eric Dier all sat out the session, along with Jack Wilshere, Phil Jagielka, Raheem Sterling, Theo Walcott and John Stones. Numbers were boosted by the presence of Nathaniel Chalobah, James Ward-Prowse and Nathan Redmond who stepped up from the under-21s.

“It feels great to be back for Spurs and to be back with England is always special,” added Kane. “Obviously I missed the last get-together with England [for the games against Malta and Slovenia], which was hard to take, but the ankle feels good now and it’s great to be back in the fold. Playing on Sunday was perfect. I’d been training leading up the Arsenal game and it was in the back of my mind that I wanted to be fit enough to be called up. I knew I had to be fit for the derby for that to be an option.

“I seem to do well in games against [close] rivals. England’s no different. If I’m picked to play on Friday I’ll be going into that game full of passion and pride, and trying to win the game for our country. The manager knows this occasion, he’s been there and done it, so any experience he can give us is vital. And he’s done that. All the lads have been listening to him, and he has put a big emphasis on how big the game is.”

1 Dave Hannigan: Trump gets the clubs back out as death toll keeps rising
2 Zoom calls with Rory and the GUI bake-off: Neil Manchip keeping the flag flying
3 Munster braced for worst of financial crisis due to Thomond Park debt
4 Sonia O’Sullivan: How to keep your competitive edge from going blunt
5 Dr Bob Rotella: ‘If you focus only on the target you’ll play darn good golf’
Real news has value SUBSCRIBE
Crossword Get access to over 6,000 interactive crosswords