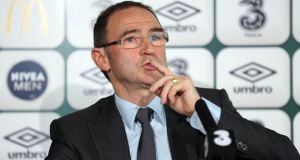 He came armed, not so much with gags but with wry observations that he nonetheless clearly hoped would raise a smile. We let him down, we were a tough crowd. Not out of badness, more a jumbling of wavelengths.

We were three questions and four minutes in by the time Roy Keane’s name came up. Would he, asked the man from RTÉ, be expecting Roy to challenge him as much as the players?

“Well, I thought you were going to ask if he was going to cause a headache. He certainly has caused me a few headaches. Someone asked me the other day, ‘Why Roy?’ And I’ve asked myself that question a number of times…”

Silence. Not a flicker from the room. Prison wardens have got bigger laughs on Stirabout Tuesday.

Thing is, we were dying to get it. We’d have loved nothing more than to chuckle along, maybe even break into song. Kids at a Greatest Hits concert for Barney the Dinosaur can scarcely compare for enthusiasm to a room of soccer hacks the day an Ireland manager is announced. Even Steve Staunton got a few chuckles way back when – and nobody was under any illusions about it ending well.

But what became clear as the afternoon wore on was that although we think we know Martin O’Neill from his various TV appearances over the years, it’s going to take just a little time to recalibrate to his particular way of thinking. It’s like he’s a compass with the needle pointing just a couple of degrees around from north. Once you adjust, you get a better sense of where you’re going.

The Keane issue was unavoidable and at times unrelenting. He was the third question, the fourth question, the fifth, the nth. Even the questions that weren’t about him were about him.

“What would Brian Clough have made of it?”

“I think he would have worried for the both of us.”

Okay, so that got a laugh. As did he response a while later when he was asked if he saw Keane as his natural successor in the job. “I, eh, well, eh… I’ll defer that one to John.”

Sitting to his left, John Delaney went bright red and shifted in his sheet. “Thank you,” he smiled, before going on to say that he hoped not to have to appoint a new manager for a very long time.

But even though so much of the talk was about a person who wasn’t in the room and who hadn’t just been named manager of the Ireland soccer team, O’Neill’s responses were those of a man completely comfortable in his own skin and thoroughly happy with his choice of assistant.

“I am absolutely delighted to have Roy on board. He’s an iconic figure in the game. All I know is that from working with him over the last couple of years in television, I have found him very, very engaging. I’ve seen him go to football matches that he has no need to go to. He loves football.

“I think like all of us in the game, he has points to prove. And I know how brilliant he was and I know how polarised opinions can be with Roy. I don’t have a problem with that.

“I don’t intend to change Roy. Maybe make the occasional adjustment if that’s possible. But a little bit of volatility will do no harm.”

Beyond Keane, there were some minor house-keeping notices to tidy up. Yes, he had an open mind when it came to players – be they retired, exiled, granny-ruled or whatever, he would rule nobody out. And no, there was nothing in his contract to say he could jump ship if a Premier League club came calling.

The contract is up until the end of the Euros in France in 2016 and his sole remit is to get the team to that tournament. Built into that, O’Neill conceded, was the need to get the Irish public back on board with their team. The fact that he and Delaney were sitting above a large banner advertising tickets for the Latvia game next Friday was lost on nobody.

“I’m not here to tell fans what to do. I’m hoping that by improving the team they will come back. And that if they come back, they will actually enjoy it. The only way to bring them back is to win games, hopefully with a bit of style.”

Do that Martin, and we’ll be laughing all the way. Jokes or no jokes.