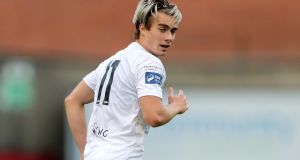 On offer for the winner at the RSC was third spot with five games left but Sligo Rovers failed to recover from falling behind after just nine minutes.

Similar to the breakthrough goal in their last home win over St Patrick’s Athletic, Robbie Weir’s floating pass from deep set up the Blues’ winner. Ali Coote drifted in between the two centre-backs to nod the ball into the direction of Smith, whose 20-yard volley flew beyond Ed McGinty into the top corner.

Hesitancy by Tunmise Sobowale though almost handed the visitors a 23rd minute equaliser. Alex Cooper raided towards goal after dispossessing the full-back and, despite rounding goalkeeper Brian Murphy, was forced too wide to get a strike on goal.

McGinty did well to save another of Smith’s long-range efforts on 27 minutes before Tyreke Wilson curled his free-kick a yard over the Sligo crossbar.

Referee Sean Grant waved away Waterford’s claims for a penalty when Kyle McFadden tripped John Martin inside the box approaching the break while Murphy had to be alert at the other end to bat away a stinging cross-shot by David Cawley.

Immediately after the restart, Murphy was once again tested by Ronan Coughlan’s drilled shot but he was fortunate to face a blunt Sligo strikeforce.

Their struggles were typified by Junior Ogedi-Uzokwe, the league’s top scorer last season, trying an audacious overhead kick with 19 minutes left which he completely miscued.