Clinical Colombia have too much for Greece

South Americans off to a winning start thanks to Armero, Gutierrez and Rodriguez 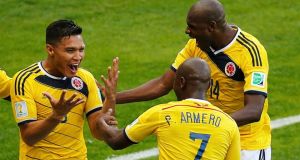 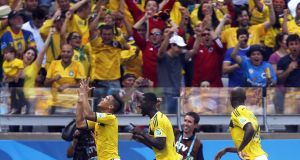 Being hard to beat is all well and good in the qualifiers but come tournament time the currency is goals and against Colombia in Belo Horizonte this afternoon, Greece were left fumbling in their pockets for inspiration.

After Pablo Armero’s scuffed shot skidded off the studs of defender Kostas Manolas and beyond goalkeeper Orestis Karnezis in the fifth minute, Greece were largely clueless as to how to break down the Colombians, for whom a second from Teofilo Gutierrez in the 58th minute sealed the first three points of Group C.

A Theofanis Gekas header that cannoned off the crossbar in the second half was as close as the Greeks came to breaching enemy lines, otherwise they were restricted to long shots from Panagiotis Kone, Giorgios Samaras and second-half substitute Kostas Mitroglou. The latter’s presence on the pitch after a season truncated by injury was, perhaps, the one positive of the night for Greece ahead of meetings with Japan and Ivory Coast in Group C.

Colombia’s threat up front was notably blunted, too, by the loss of Radamel Falcao to a knee injury before the tournament, but they have ammunition in reserve and though the early goal assured there was no risks taken, they still managed two more, the third coming from the lively Monaco midfielder James Rodriguez in injury time.

Given the Greeks’ reputation for frustrating their opponents with defensive tactics, Colombia’s early breakthrough was celebrated wildly by the vast majority of supporters in the Estadio Mineirao. The South Americans almost threw away their precious advantage immediately, Samaras squeezing a pass to the unmarked Kone in the box who shot narrowly wide.

Colombian keeper David Ospina had almost nothing to do in the opening half-hour but Rodriguez and Cuadrado spurned half-chances for Colombia at the other end before Kone had his side’s best effort on the stroke of half-time, when firing a rising right-foot effort which was superbly saved by Ospina.

Greece coach Fernando Santos sent his side out for the second half with more urgency, but despite the best efforts of Samaras it was the Colombians who eventually extended their lead. A corner from the right was flicked across the face of goal by Abel Aguilar and Gutierrez stuck out a leg to put his side 2-0 up.

Gekas missed his golden chance to reduce the deficit on 61 minutes when his diving header connected with Vasilis Torosidis’s cushioned lay off but the crossbar intervened when it seemed easier to score.

As the pressure began to ease on the Colombians, they looked to take advantage of the counter-attack with substitute Santiago Arias finishing a mazy run by drilling a low shot at Kamezis on 76 minutes.

Rodriguez grabbed the goal he deserved in injury time when he picked up a neat lay-off from Cuadrado to slide the third past the hapless Kamezis.

The result underlines Colombia’s pre-tournament status as favourites to progress from Group C while Greece must look to get something out of their clash with Japan next Thursday in order to avoid continuing their record of never having progressed beyond the group stages of a World Cup finals.