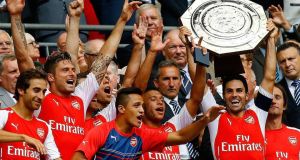 Goals from Santi Cazorla, Aaron Ramsey and Olivier Giroud secured a thoroughly deserved victory for Arsenal, who after going nine years without a trophy now have two in 85 days, with this triumph following that over Hull in May’s FA Cup final. City were, in fairness, under-strength, with a host of first-team players, most notably Sergio Aguero, Vincent Kompany, Fernandinho and Pablo Zabaleta, not considered for selection after their post-World Cup breaks.

“To win today gives us a positive platform to prepare,” he said. “It was important for our confidence to win the game and it was even more important to have a big part in the game. That is a comfort to me to see that we can produce the kind of quality we have produced for some long patches in the game.” Arsenal failed to beat City in the league last season, losing 6-3 at the Etihad Stadium and drawing 1-1 at the Emirates Stadium. They also failed to beat Chelsea and lost at Liverpool and Everton.

For Manuel Pellegrini, the hope is that most of his squad have the required match fitness when their defence of the title begins against Newcastle on Sunday. “It will be difficult to be ready,” said the City manager. “We have seven players who have just worked five days and another five players who have worked eight or nine days, so we will see which of them are ready.”

Pellegrini again suggested Joe Hart will face a battle to be a regular for City, having said last week the club has “two No1 goalkeepers” after the £4.4 million arrival of Caballero from Malaga. The 32-year-old Argentinian made his City debut yesterday and could not really be blamed for any of Arsenal’s three goals.

Asked if Hart will start for City at St James’ Park, Pellegrini said: “All the 22 players we have must demonstrate who is No1 in all the positions. Joe finished last season playing very well. We will see next Sunday. . .”

1 Stephen Kenny replaces Mick McCarthy as Ireland manager
2 Understated Stephen Kenny offers Ireland a ray of light
3 Matt Williams: The economic earthquake for European rugby is coming
4 Simon Zebo: ‘It’s been tough not being able to put my hand up to play with Ireland’
5 Pat Critchley: ‘You teach or coach the person first and the subject or the game second’
Real news has value SUBSCRIBE