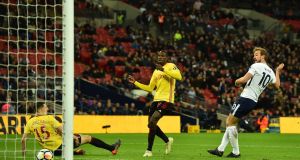 If this is the stage of the season when the result is all that matters, then Tottenham will reflect on this victory with a measure of satisfaction. They were rarely at their cohesive best and there were times when their anxious mindset threatened to suffocate their efforts to extinguish the disappointment of failing to reach the FA Cup final. Yet they still finished the job with something to spare and in the end this was a timely reminder that this team is made of sterner stuff than many of their predecessors.

With Chelsea threatening to creep up behind them, Tottenham could not countenance a return of some of their less impressive habits. But while the marketing gurus at the Premier League probably would not have minded seeing Watford springing a surprise on a chilly Wembley evening, just to inject a bit of life into the race for the top four, the home team were too professional to allow that to happen.

They used Dele Alli’s opener as a springboard for a win that moves them five points above fifth-placed Chelsea with three games left and punished the weaknesses Javi Gracia’s team exhibited at both ends of the pitch. Watford, who are still not mathematically safe from relegation, finished with nothing to show for a spirited display.

The atmosphere often felt subdued, with plenty of empty seats dotted around the ground, and it was difficult to shake off the impression that Tottenham were still trying to come to terms with being knocked out of the FA Cup by Manchester United. There was a slight air of edginess about their play for much of the opening period and Mauricio Pochettino might have felt a little uneasy about his team’s tentativeness in the final third, especially when Harry Kane spurned a decent shooting opportunity with an awkward piece of control in the 12th minute.

Watford sensed an opportunity to exploit that unease, showing inventiveness on the break and threatening to cause problems whenever Richarlison wriggled into space on the left. Will Hughes had a sighter from long range inside the first minute, a cross from Kiko was just too high for the players waiting in the middle and Tottenham’s defenders were relieved to see Hugo Lloris deny Andre Gray with an excellent save in the 25th minute.

The frustration for Watford, however, was that one defensive aberration had already undermined their enterprising approach by the time Gray saw his snapshot pushed away. A team with Tottenham’s attacking options rarely require a helping hand from their opponents and Orestis Karnezis will wince when he watches a replay of the mistake that gifted the home team an undeserved lead.

The threat looked minimal when Kieran Trippier whipped a cross towards the near post from the right flank. It should have been a routine catch for Karnezis. Instead, the Watford goalkeeper was distracted by Christian Kabasele ducking underneath the ball and his disastrous fumble presented Christian Eriksen with the chance to tee up Alli, who drove a low shot into the empty net.

Yet Pochettino was mistaken if he thought that isolated show of composure from Alli would settle his players. Tottenham barely created another chance before the break and Watford, who impressed when Hughes had time to pick a pass, were entitled to feel they were unlucky to trail.

The visitors targeted Tottenham’s unconvincing high line, forcing Lloris to race out of his area to beat Abdoulaye Doucouré to a through ball, and all that was missing was a touch of ruthlessness. A lovely backheel from Hughes released the midfielder, who shot straight at Lloris, and Richarlison also had an effort pushed away after combining with Gray.

Tottenham would make Watford regret such generosity. The hosts emerged with greater focus at the start of the second half, with Eriksen demanding the ball and Mousa Dembélé determined to gain control of the midfield battle, and it felt like normal service had been resumed when Kane made it 2-0.

The goal stemmed from one of those flowing moves that have made Spurs so enjoyable to watch under Pochettino, Eriksen shuffling a pass to Alli, who poked the ball through to Son Heung-min on the left. He wasted no time turning the ball across goal and, although Kane slipped in the middle, the striker sprung back to his feet to meet Trippier’s centre with a crisp shot.

Kane has looked out of sorts since returning from an ankle injury, but his 38th goal of the season underlined his importance to this team. Watford, winless on their travels since 25 November, had been put in their place. Richarlison contrived to fire over from close range and Gerard Deulofeu had a goal correctly disallowed for offside after replacing Kiko, but Tottenham were comfortable in the end. – Guardian service