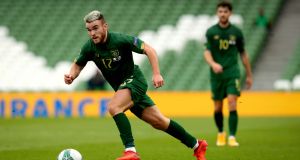 It feels like a world away when Mick McCarthy was Ireland manager and a draw with Denmark in Dublin meant Ireland would have to win two playoff matches away from home in the space of five days to qualify for Euro 2020.

Indeed it’s 11 months since that 1-1 draw at Lansdowne Road and, it’s fair to say, quite a bit has happened since – both in Irish football and across the world.

McCarthy’s chance of leading Ireland to the Euros was taken away by the Covid-19-enforced shutdown of sport across Europe and now, almost a year since it was confirmed that Ireland were destined for the playoffs, Stephen Kenny will take his charges to Bratislava and then, should Ireland win, on to Sarajevo or Belfast in November.

Currently next year’s rescheduled Euro 2020 is due to go ahead as planned in 12 cities across Europe but, given what we’ve learned over the last seven months about living in a pandemic, it’s virtually impossible to imagine that actually being the case. However, we have seen that football can continue in this strange fan-less bubble so we can probably be reasonably confident that there is a tournament to actually qualify for. What form that tournament takes is anyone’s guess.

So, can Ireland reach a third European Championships in succession? Here is all you need to know ahead of the Euro 2020 playoffs.

Ireland meet Slovakia in Bratislava on Thursday, October 8th with the match kicking off at 7.45pm Irish time.

How do the playoffs work?

Each match is a one-legged affair to be decided by extra-time and penalties if needed. Ireland are in Path B of the playoffs (determined by the 2018/19 Nations League positions) and will meet Slovakia in the semi-finals while Bosnia & Herzegovina welcome Northern Ireland in the other semi-final. Should Ireland beat Slovakia they will play the winners of the other match in either Sarajevo or Belfast on November 12th.

The Irish Times liveblog will begin at 7pm on Thursday night. The match will also be shown live on RTÉ2 from 7pm and Sky Sports Football from 7.30pm.

It’s been so long since qualifying ended, remind us again how we’re in these playoffs?

Do you want the long Nations-League-permutations-filled explanation? Or the simplified explanation? Let’s go with the simplified one. Despite finishing third in Euro 2020 qualifying Group D, behind Switzerland and Denmark, Ireland managed to nab a playoff spot as a result of the fact that enough teams ranked above Ireland in the 2018/19 Nations League (in which Ireland finished bottom of Group B4 with a single point) qualified automatically for the tournament. That meant that the playoff spots (of which there are four from each of the four Nations Leagues) went to the highest ranked teams who had not qualified automatically. Ireland, Slovakia, Bosnia & Herzegovina and Northern Ireland satisfied that criteria from League B so that is why Ireland are now in a mini-tournament with those three other teams.

Yes, that is the simplified explanation so don’t ask for the longer one. Essentially, with 24 teams qualifying for the final tournament, Ireland are being given every opportunity possible to get there.

Will there be any fans in the ground?

While some European countries such as Germany and Poland have reintroduced fans in to grounds, the Slovakian government last week declared a state of emergency in the country due to rising Covid numbers and have banned all sporting and cultural events. Thursday’s playoff will go ahead as an exemption but no fans or members of the Irish media will be present. Slovakia was recently taken off the Irish government’s travel green list, meaning people returning from the country would have to self-isolate for 14 days, but an exception is being made for the 45-strong FAI party which includes staff and players.

How is the Irish squad looking?

There was a blow for Stephen Kenny on Saturday when Séamus Coleman limped out of Everton’s win over Brighton with a hamstring injury and, on Sunday, the Ireland manager confirmed that his captain will be out of Thursday’s match. It’s a big disappointment for Coleman who did not play at all in Kenny’s first two matches in charge (the Nations League draw with Bulgaria and defeat to Finland) but the Donegal man has been in brilliant form since and it would have been a difficult decision this time around for Kenny not to put him in the team.

However, that decision has now been made for the Ireland manager and Matt Doherty – who played at right-back in those two Nations League matches – looks set to continue in that role on Thursday although there will be a lot of interest in whether Kenny continues with the 4-3-3 he employed against Bulgaria and Finland or opts instead to play Doherty as a wing-back in a 5-3-2 – a formation that a number of Irish defenders play in at their clubs.

Darragh Lenihan and Harry Arter have also been ruled out after picking up injuries playing for their clubs on Saturday meaning Cyrus Christie and Kevin Long have been called up as replacements. David McGoldrick’s goal for Sheffield United against Arsenal on Sunday will give him a confidence boost but Doherty and Darren Randolph both failed to get off the bench for Spurs and West Ham respectively on Sunday.

The home side are narrowly the bookies’ favourites for Thursday’s game and this should present a tougher test for Kenny then Bulgaria or Finland did. Former Napoli playmaker Marek Hamšík, who now plays in China, is probably the home side’s best known player but Lazio’s Denis Vavro is also very highly rated. Kenny has already pointed to the Slovak’s experience in midfield as being one of their strong points with Hamsik expected to play alongside Stanislav Lobotka of Napoli and Parma’s Juraj Kucka.

Like Ireland, Slovakia started their Nations League campaign fairly poorly with a loss to Czech Republic and a draw with Israel but, given the fact that they were missing a number of high profile players, Kenny does not think that much bearing can be put on it.

Well, speaking of the Nations League, Ireland actually have three matches in the space of a week coming up with the playoff against Slovakia followed by a meeting with Wales in Dublin on Sunday and a trip to Helsinki on Wednesday to face Finland, both of which are Nations League matches.

And while that tournament is undoubtedly important given that it offers a potential back-up route into the 2022 World Cup, all the focus will be on Bratislava on Thursday to see if Kenny can guide Ireland to within one win of Euro 2020 in just his third game in charge.