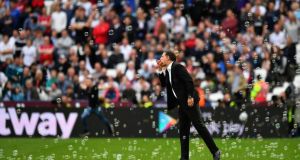 Diafra Sakho came in from the cold to hit a last-minute winner and dig West Ham manager Slaven Bilic out of a hole.

The London Stadium was almost in open revolt following an insipid 89 minutes from the home side against Swansea.

But Sakho, who if he had got his way on transfer deadline day would now be in France playing for Rennes, climbed off the bench to secure a 1-0 win and bail out his boss.

Even Bilic had branded this a “must-win” game, and he should know - so precarious has his position looked at times that West Ham have had about 10 in the last 12 months.

The credit that the Croatian built up during the final season at Upton Park seems to have evaporated, if the boos which rang round at his decision to substitute Javier Hernandez are anything to go by.

Yet West Ham are somehow now out of the bottom three, and with games against Brighton, Burnley and Crystal Palace coming up, Bilic will feel they can climb further away from trouble.

Stoke substitute Peter Crouch spared Saido Berahino’s blushes as he came off the bench to register the winner against old club Southampton.

Having led through Mame Diouf’s header, Berahino then had a penalty to end a goalless streak that dates back to February 2016, but he missed his fourth successive spot-kick during that drought as Fraser Forster kept it out.

It looked like it would prove costly when Maya Yoshida headed in a 75th-minute equaliser, yet Crouch, who came on for Berahino, poked in the winner from close range to make it 2-1 and earn the Potters their first win in six.

Bournemouth were denied a clear penalty as they wasted numerous chances to secure a convincing victory in a 0-0 draw at home to Leicester.

Danny Simpson’s handball sent Marc Pugh’s early goal-bound shot wide and went unpunished, but even amid that sense of injustice, the hosts were so dominant and their visitors so poor that that should have had little influence on the outcome.

Instead Bournemouth will reflect on the costly way they dropped two points and Leicester leave relieved at avoiding defeat.

West Brom were denied a first win in five Premier League matches after Richarlison’s header deep into added time salvaged a 2-2 draw for Watford at The Hawthorns.

Quick-fire goals from Salomon Rondon and Jonny Evans had Albion on course for victory, despite Abdoulaye Doucoure halving Watford’s deficit before half-time.

Only Manchester City have managed to get the better of Marco Silva’s side this season and they eventually got the point their performance deserved when Richarlison struck right at the end.

1 Georgia and Fiji in line to join Six Nations sides in eight-team tournament
2 Ken Early: Another Mourinho masterclass in going through the motions
3 Malachy Clerkin: Sleep well Jack, you made us all happy
4 The Offload: All eyes on Leinster’s academy intake
5 David McGoldrick reveals racist messages received online
Real news has value SUBSCRIBE