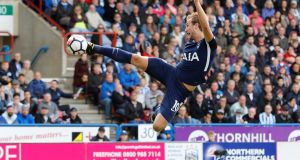 Harry Kane stole the show as Premier League title challengers Tottenham cruised to a 4-0 win over Huddersfield at the John Smith’s Stadium.

Man-of-the-moment Kane buried Tottenham’s first chance early on and, after Ben Davies had put them 2-0 up, he struck with a brilliant solo effort to wrap the match up before half-time. Moussa Sissoko added a late fourth.

Spurs have won their last four games in all competitions and extended their winning run on the road to seven matches, while the irrepressible Kane took his goal tally in a productive September to 13 in eight appearances for club and country.

Huddersfield, facing their toughest test since promotion via the play-offs in May, had boasted the Premier League’s second best defensive record this season - but Mauricio Pochettino’s side demonstrated the gulf in class.

Tommy Smith forced Hugo Lloris into a decent save in the fifth minute with a well-struck low drive and the Terriers showed they meant business by snapping into their early tackles. But after Rajiv van La Parra’s goalbound shot had been blocked by Eric Dier, Tottenham broke forward and scored with their first chance.

Kane chased Kieran Trippier’s header and was allowed a free run on goal after Huddersfield defender Chris Lowe had misjudged the flight of the ball, with the in-form striker applying the usual clinical finish in the ninth minute.

Six minutes later the Londoners doubled their advantage. Dele Alli, back after suspension, Kane and Christian Eriksen all linked seamlessly on the edge of the area and Davies buried his chance at the far post after the ball had been unintentionally diverted into his path by Lowe.

Kane then made it 3-0 with a world class goal in the 24th minute. With his back to goal and surrounded by Huddersfield defenders, the number 10 turned and evaded them all before curling a brilliant left-footed finish inside the near post - his seventh goal in a productive week.

Kane, the Premier League’s Golden Boot winner for the last two seasons, failed to score in August, but followed up his midweek Champions League hat-trick against Apoel in brilliant fashion. Alli went close to making it 4-0 when his shot after a neat turn inside the area hit a post, before Huddersfield striker Laurent Depoitre gave the home fans some cheer, firing in a shot from the edge of the area that clipped the crossbar.

Alli was booked by referee Neil Swarbrick for diving under goalkeeper Jonas Lossl’s challenge on the hour-mark as Huddersfield battled gamely on. To their credit, David Wagner’s side did not capitulate, allowing Tottenham no further scoring chances, while the introduction of Scott Malone and Philip Billing for Lowe and Aaron Mooy gave them some impetus.

Van La Parra combined well with Depoitre in the closing stages, but the former’s shot was blocked before Kane left the field to a rousing reception from all stands when replaced by Son Heung-min.

Sissoko, a 75th-minute substitute for Eriksen, sidefooted home his first goal for Spurs in time added on - via a deflection off Christopher Schindler - following Davies’ cross.