Plenty of gilt but no guilt at vapid briefing 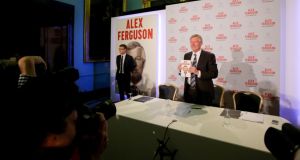 Alex Ferguson poses during the press conference to launch his autobiography at the Institute of Directors on London’s Pall Mall. Photograph: Clive Rose/Getty Images

To the Institute of Directors on London’s Pall Mall for the launch of an eagerly awaited football tome that may well outsell The Da Vinci Code and contain even more outlandish conspiracy theories.

Whether it’s his attitude to officialdom, the tapping-up of players, or the touchline antics of rival managers, Alex Ferguson has regularly been accused of hypocrisy, so it came as no surprise that even in retirement this firebrand socialist and former shop steward chose to launch his memoirs at the headquarters of an organisation known, some might argue, for its contemptuous attitude towards trade unions.

Unsurprisingly, throughout an absorbing, but nowhere near white-knuckle question-and-answer session, the peculiar choice of venue was a subject that went unraised.

Those of a less cynical bent might point out that the logo of the Institute of Directors references the Greek character Phi, which its Wikipedia page helpfully reveals has “over the millennia” come to “symbolise the pursuit of excellence”.

During this millennium and the tail-end of the last, no manager has symbolised its single-minded pursuit across the football landscape as much as the knight of the realm and former Old Trafford autocrat.

Vision in gilt
A vision in gilt, turquoise, glass and canvas, the IoD’s Nash room was the venue for this press conference. The brush-strokes on its massive portraits of long-dead members of the monarchy may not have been the equal of those of the “nice little painting” by the Fulham and former Manchester United midfielder Kieran Richardson Ferguson had hanging in his Old Trafford office, but they added a suitably regal tone to a 45-minute audience in which an air of general obsequiousness was only occasionally polluted by minor acts of interrogatory insubordination.

With almost 200 folk in attendance, the gravity of the occasion could be gauged by the presence of no less a journalistic heavyweight than Nick Robinson, the occasionally shouty political editor of the BBC.

Preposperous
Lest there be any confusion: this preposterous media circus, about which the Guardian was as enthused as everyone else, was generated by the launch of a book.

And so to the questions. With four helpful microphone-wielding ladies prowling the floor, they came thick and fast ... but sometimes just thick to the point of impenetrable. The first, a (hopefully) light-hearted request from one Chinese journalist for Ferguson to apologise to a colleague of hers he seems to have unintentionally offended some years ago left everyone confused. “Well, that was a great start,” laughed Ferguson, peering quizzically at his interrogator before asking: “What was the question again?”

Over 45 minutes there was plenty of ebb and flow, with a suited Ferguson never looking entirely comfortable or relaxed as he repeatedly clicked open and shut the cap of the pen he was holding, perhaps in preparation for the myriad book-signing sessions that loom.

A strict one-question limit forced journalists to use all their cunning. “That’s three questions,” Ferguson faux-barked at the man from one sports-news broadcasting company. “Typical Sky. Greedy.”

Stand-out moment
Although he wasn’t present, the former Football Association chief executive Adam Crozier may be pleased to learn he provided the stand-out and stand-up moment of the afternoon, his name pointedly not cropping up as Ferguson struggled to recall “the Scots lad from the Post Office” who was given the task of offering him the England manager’s job.

According to his estimable ghostwriter Paul Hayward, “behind Ferguson the dictator you find a totally different man. One who laughs incessantly and seeks out the fun in life”.

Neither Ferguson the dictator nor his fun-loving counterpart showed themselves at the launch of his latest memoir, a vapid briefing devoid of fireworks or fun, rendered all the poorer by the non-appearance of either version of this mighty football man. –
Guardian Service

1 Felix Jones expects De Allende and Snyman to boost Munster
2 Gerry Thornley: Saracens very late to apologise for repeated cheating
3 The Offload: Saracens eye chance to extend tainted record
4 Donegal’s Yvonne Bonner very much up for Down Under
5 Welcome to the Greenlandic championship: Soccer at the edge of the world
Real news has value SUBSCRIBE