Wins for Premier League sides Liverpool, Chelsea and Sunderland in third round 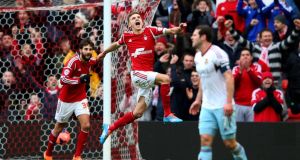 Jamie Paterson of Nottingham Forest celebrates after he scores their fourth goal and completes his hat-trick during the FA Cup third round match against West Ham at the City Ground. Photograph: Julian Finney/Getty Images

FA Cup round-up: Sam Allardyce faces fresh questions over his future as West Ham manager as an unrecognisable side were routed by second-tier Nottingham Forest in the third round of the FA Cup.

The Championship side’s emphatic 5-0 win – courtesy of Djamel Abdoun’s cheeky ‘Panenka’ penalty, Jamie Paterson’s second-half hat-trick and skipper Andy Reid’s late finish – might go down in some quarters as a cup upset but once the team-sheets were announced the bookmakers had already installed the hosts as favourites.

Allardyce, with injury and suspension problems and a Capital One Cup semi-final in midweek, handed out a total of five debuts, three from the start and two more off the bench, among nine changes to his team.

It was a gamble that backfired horribly as the relegation-battling Hammers simply had their confidence further assaulted by lower-league opposition.

The young rookies – Seb Lletget, Danny Whitehead, Callum Driver, Reece Burke and Blair Turgott – can hardly be blamed for the humbling result, but Allardyce may not be as lucky.

His future may detract slightly from Paterson’s efforts, but it should not, with the winger winning his side’s spot-kick and then converting three fine goals of his own.

Much-maligned forward Iago Aspas scored his first Liverpool goal to help his club into the fourth round but it was far from an easy 2-0 victory over Oldham.

The 26-year-old summer signing from Celta Vigo has endured a difficult start to his Anfield career and never looked comfortable in the Premier League.

Wearing the number nine shirt for Liverpool carries significant history and expectation considering the greats who have graced it in the past.

But Aspas was handed the responsibility of leading the line with 20-goal striker Luis Suarez rested and he eventually delivered with a decent strike 10 minutes after half-time.

James Tarkowski’s late own goal, diverting in Raheem Sterling’s shot, gave Liverpool the cushion they needed, especially as they were down to 10 men after Daniel Agger was forced off injured with three substitutions already made.

There was to be no fairytale repeat of Oldham’s fourth-round victory over the Reds last January and Liverpool can now look forward to a trip to either Bournemouth or Burton Albion.

John Obi Mikel was an unlikely goalscorer to set Chelsea on their way to a 2-0 FA Cup third-round win at Derby which featured another diving incident.

The Rams had won 10 and lost just two of their prior 15 games under former England boss Steve McClaren and proved difficult for Jose Mourinho’s men to break down at the iPro Stadium.

But Mikel headed in his fourth Chelsea goal on his 300th appearance after 66 minutes and Oscar added a second soon afterwards.

Chelsea’s 16th successive third-round triumph – their last loss at this stage was in 1998 against Manchester United – set up a fourth-round tie at home to Stoke, but was tinged with controversy as Ramires was booked for diving by Andre Marriner.

Referee Marriner controversially awarded Chelsea a penalty in the home draw with West Brom in November, after Ramires went to ground under minimal contact from Steven Reid.

That decision saved Mourinho’s unbeaten league home record at Chelsea, but there was no direct impact on the result on this occasion.

However the incident did place renewed doubt on Mourinho’s claim that “there are no divers at Chelsea” following Oscar’s booking in the New Year’s Day win at Southampton.

Beleaguered Gus Poyet was handed a boost as Sunderland eased past Graham Kavanagh’s Carlisle 3-1 to book their place in the fourth round.

The relegation-haunted Black Cats headed in at 1-1 at half-time after Matty Robson had cancelled out Adam Johnson’s fine free-kick.

However, Sean O’Hanlon’s own goal and a late strike from substitute El-Hadji Ba meant it ended 3-1 to the hosts, killing off any hope of an upset for the 5,631 travelling fans among a crowd of 21,973 and securing a fourth round home tie against either Kidderminster or Peterborough for Poyet’s men.

The fact that it was achieved without skipper John O’Shea, Italy midfielder Emanuele Giaccherini and main striker Steven Fletcher will have been a source of comfort for the Uruguayan amid a cluttered schedule.

However, while progression in both domestic cup competitions has been welcome, it is the fight for Premier League survival which remains the overriding priority.

Ties to be played on the weekend of January 25th and 26th.