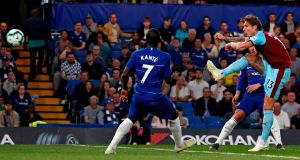 Chelsea are the latest side to stutter in their pursuit of a top four finish. The draw that as good as secured Burnley’s place in the Premier League for another season shifted Maurizio Sarri’s team back into the Champions League qualification places, but theirs could still be a temporary stint amongst that quartet. This was a missed opportunity on a night where, mentally and physically, a brutal season appeared to have taken its toll.

The Londoners rather ran aground on abrasive and well drilled opponents as this contest dragged on, the rat-a-tat of shared first half goals having given away to a grim slog in pursuit of a winner. Burnley competed ruggedly and admirably, repelled everything thrown at them, and infuriated their hosts as they ran the clock down towards their latest critical point. The local frustration was palpable with Chelsea, their options increasingly clipped by injuries, aware that all those immediately around them have midweek fixtures in which they could steal back momentum. Sarri had warned there would be twists and turns to endure before the season’s end, and he will have taken no pleasure in being proved correct.

For all the discontented murmurings over style and approach, Chelsea have actually been rather more thrilling to watch of late since Maurizio Sarri, burdened by a cluttered fixture schedule, had placed more faith in youth and incorporated the likes of Callum Hudson-Odoi and Ruben Loftus-Cheek into his league lineup. That pair have been a breath of fresh air, particularly in home fixtures where they have regularly dazzled. Their energy has also served to liberate Hazard, whose desire to end this season on a high has been all too apparent with every outing. Hudson-Odoi would not see out the first half here, landing awkwardly and appearing to damage an ankle, though he had still contributed to a riotous opening period.

The hosts had showcased their fluent, attacking intent. There had been Loftus-Cheek’s barnstorming run from deep, Jeff Hendrick bouncing off him helplessly en route, and Hazard’s tormenting of Matt Lowton as he sized up a cross. Twice the full-back thought he had his man covered, and twice he was hoodwinked and left embarrassed. He had barely picked himself up off the floor by the time N’Golo Kanté, free nearer the penalty spot, slammed in a fourth goal of the campaign from the Belgian’s pull-back.

Fast forward 113 seconds and Jorginho’s burst, Cesar Azpilicueta’s cute back-heel and Gonzalo Higuain’s slick spin away from Ben Mee would slice Burnley open yet again. The angle was unkind for the Argentinian, but Higuain took out some of the frustration that has been building for weeks to thrash in his team’s second across Tom Heaton and in off the underside of the crossbar. Throw in Higuain’s guided volley, hooked off the line by a retreating Ben Mee, and Loftus-Cheek’s whipped effort just high and wide, and the hosts’ attacking threat was obvious.

Yet, without the injured Antonio Rüdiger marshalling the rearguard, their vulnerability had been just as glaring. Those Chelsea goals had been sandwiched between the visitors’ own rewards, both conjured from neatly constructed set-plays and rightly celebrated with relish. There had been Hendrick’s stunning volley, thumped in from the edge of the area after Azpilicueta had headed a corner half clear. Just as the hosts appeared to have wrested back the initiative, Ashley Westwood floated over a free-kick to Mee, his run beyond the far post unnoticed, with the centre-half’s header flicked on by Chris Wood and converted on the volley by Ashley Barnes. The striker had also been left alone to net an 11th goal of the season, to leave Sarri agitated on the sidelines.

The Italian exchanged words with the Burnley bench on more than one occasion, not least after Heaton had been booked for time-wasting half an hour in.

They clashed again after the interval when Charlie Taylor’s checking of the substitute, Pedro, went unsanctioned with Sarri blocked from entering the away technical area by the fourth official. The loss of Kanté, presumably to injury, will not have improved the Italian’s mood with his side’s defending every bit as fragile as during the seven-goal tête-á-tête with Slavia Prague last midweek. Jorginho’s obliging pass to Barnes almost culminated in Wood easing clear, and rather summed up the simmering sense of chaos.

The visiting front-line bullied their markers at times, every high ball launched down the centre provoking pangs of anxiety, while Chelsea’s own attacking forays became clogged up amid Burnley shirts. The initial rhythm had drained away, the hosts rather running out of ideas as Sarri fidgeted nervously on the sidelines. They have still recovered a deficit to defeat only Cardiff City, twice, this term. For all that Burnley merited their point, the home side, above Arsenal only by a point, departed knowing this draw could ultimately prove damaging.

Sarri was sent to the stands after the game was halted in for an altercation in stoppage time.