January transfer window: what are the plans of each Premier league club? 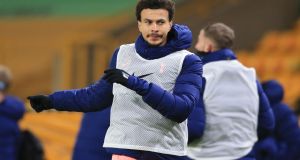 Will Dele Alli get a Janaury move away from Tottenham? Photograph: Lindsay Parnaby/Getty

Arsenal need to shift a formidable bulk of dead wood before they can make significant efforts to address, among other things, an enduring lack of creativity. Sead Kolasinac has joined Schalke on loan and is among several they hope to move out, at least temporarily. At this point any incomings are likely to be loans, too, with Isco among the names considered before Mikel Arteta looks longer-term in the summer. Nick Ames

With their pre-season recruits making rapid impacts, Villa are not in urgent need of reinforcements, especially with several players close to returning from injuries, including Trézéguet and Wesley. Ross Barkley is also due back soon, and converting the midfielder’s loan from Chelsea into a permanent transfer is one potential deal. Regarding departures, players such as Henri Lansbury and Neil Taylor may be open to loans. Paul Doyle

Graham Potter is keen to recall the South Africa striker Percy Tau from Anderlecht but the focus will likely be on offloading fringe players. The Australia goalkeeper Mat Ryan could depart for the right price, and Jayson Molumby could return to the Championship on loan. Brighton are in no mood to sell their standout performers Ben White, Tariq Lamptey or Yves Bissouma. Ben Fisher

Burnley’s new US owners have promised to back Sean Dyche, who would welcome a more generous budget. “Regarding the window, when we are fully fit we are not a million miles short,” the manager said recently. “Things only happen in windows when you have finance, we don’t know what that is. It is a tricky window anyway, it is a very short window and it is tough to align certain situations and to get them to happen.” Jamie Jackson

With a move for the West Ham midfielder Declan Rice likely to wait until the summer, Frank Lampard’s focus will be on trimming his squad. Fikayo Tomori, fifth choice at centre-back, could leave on loan and Marcos Alonso is available after falling behind Ben Chilwell and Emerson Palmieri at left-back. If Chelsea find a buyer for Antonio Rüdiger, though, Tomori could stay. Jacob Steinberg

The back-to-basics approach implemented in the recent draw with Leicester came in response to conceding 10 goals in their two previous matches and it’s likely Roy Hodgson will have to approach the window with similar pragmatism. Having spent big on Eberechi Eze in the summer, Palace will not have the resources to make major changes and could face interest in a rejuvenated Wilfried Zaha, who has been linked with a move to the Serie A leaders Milan. Ed Aarons

After a significant spend in the last window, and a club record loss of £139.9m in the last financial year, Carlo Ancelotti does not expect to be busy, although he may be in the market for a forward to cover Dominic Calvert-Lewin should Cenk Tosun depart. Everton plan to make the goalkeeper Robin Olsen’s loan from Roma permanent, and Sami Khedira, out of contract at Juventus this summer, has been linked repeatedly.Andy Hunter

Scott Parker’s team have improved at the back after signing defenders during the last window. However they lack ruthlessness up front, with Aleksandar Mitrovic struggling in front of goal. Finding a potent striker could make the difference in Fulham’s attempt to stay up. Funds could be raised by shifting Jean Michaël Seri, who was left out of Parker’s Premier League squad. JS

Having navigated their way through an injury crisis while remaining high in the table, Leicester go into January feeling good. Brendan Rodgers said he did not expect to make signings but did not rule out moving for any bargains that may arise. Leicester would likely listen to any loan offers for Demarai Gray and Islam Slimani. PD

All the indications are that Leeds are unlikely to buy. Pandemic-affected finances apart, Marcelo Bielsa is not a fan of the January window, preferring to restock his squad in the summer. Victor Orta, Leeds’ director of football, is drawing up detailed plans for a close-season overhaul. The only possible January exception could be a loan signing or two, primarily to provide cover for Bielsa’s defensive injury crisis. Louise Taylor

The concentration of injuries in central defence, with Joël Matip the latest sidelined and the champions increasingly reliant on Fabinho’s dependability and availability, gives Jürgen Klopp the dilemma of whether to sanction a rare January move or continue to trust young players such as Rhys Williams and Nat Phillips. Liverpool do not expect any senior departures but would be tempted by a decent bid for Divock Origi. AH

Pep Guardiola would dearly love to buy a goalscorer of the quality of Borussia Dortmund’s Erling Braut Haaland because of Sergio Agüero’s injury problems and veteran status but this is highly unlikely in this window. As is any other significant recruitment because of finance and availability. JJ

As with Guardiola, Ole Gunnar Solskjær has stated he is content with his squad so although it is again a case of never-say-never regarding January recruitment the chance is minimal. Dortmund’s Jadon Sancho remains a long-term target and the club hopes to offload fringe players such as Jesse Lingard, Phil Jones and Marcus Rojo. The 18-year-old Amad Diallo is set to join, however, after a deal that could rise to €40m was agreed with Atalanta last summer. JJ

Steve Bruce has been told no money is available but he intends to stem growing criticism from supporters and stave off a potential relegation battle by utilising the loan market. With Newcastle arguably over-dependent on Callum Wilson’s goals, an extra striker tops the target list. Mike Ashley, the owner, prefers to spend his pandemic-hit funds on an expensive legal battle with the Premier League over Newcastle’s failed Saudi Arabian-led takeover. LT

Chris Wilder has been told a combination of Covid-damaged finances and the Blades desperately insecure Premier League status dictate he cannot buy but he hopes to secure two loan signings, one a defender. The loss of Jack O’Connell to a serious knee injury has contributed to the woeful form which has seen United all but condemned to relegation. Preston’s Ben Davies is regarded as an ideal replacement, capable of slotting into O’Connell’s usual role as the left-sided component of a central defensive trio. LT

Any incomings are likely to be loans with a view to making the move permanent, as they did with Kyle Walker-Peters and having brought in Theo Walcott, out of contract at Everton in June. They could rekindle a move for Manchester United’s Brandon Williams to beef up their options at full-back but, not blessed with the deepest squad, they are happy to give youth a chance. BF

Will Dele Alli get a move? He is frustrated at a lack of playing time but José Mourinho, who is without the injured Giovani Lo Celso for about a month, did name Alli in the starting XI against Fulham on Wednesday – a game which was then called off. It is unclear whether Spurs would be able to get serious money for Alli this month. The club know they could have Christian Eriksen back from Internazionale if they want. Mourinho has said that Harry Winks is going nowhere. Gedson Fernandes could be loaned out. David Hytner

Sam Allardyce has made no secret of his eagerness to bring in new blood, saying January trading could be crucial to West Brom’s survival. He knows the club will not spend heavily but could raise funds through sales and says “players could be cheaper than they have ever been because of this pandemic”. Another striker is high on his wish list, with Everton’s Cenk Tosun under consideration. PD

Expect a quiet month given that David Moyes’s side are mid-table. Although Michail Antonio’s absence has exposed a lack of depth up front, funds are limited and West Ham are unlikely to panic. They could wait until the summer before pursuing Slavia Prague’s Abdallah Sima. Frederik Alves, a 21-year-old defender who officially arrives on New Year’s Day, is one for the future. JS

Wolves have one glaring need: a striker to fill the gap left by Raúl Jiménez, who continues to recover from the fractured skull suffered against Arsenal in November. Fabio Silva has deputised enthusiastically but, at 18, does not look ready to carry the burden by himself. One potential solution is Diego Costa, who recently negotiated a departure from Atlético Madrid, has ample Premier League experience and an agent, Jorge Mendes, who regularly works with Wolves. PD