Raheem Sterling the star as Man City pile on the pressure

Manchester City manager Pep Guardiola believes the Premier League trophy is within reach after his side's 3-1 win over Crystal Palace, but they will have to win all their remaining games. Video: Perform Group 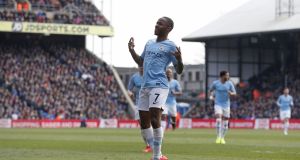 Manchester City will not let up. There was a period of around nine minutes towards the end here when the visitors endured something akin to pangs of anxiety as their hosts pressed fitfully for an unlikely equaliser but this was a straightforward success against the only team to have claimed Premier League points from the Etihad stadium to date this season.

Up to then, it had been a win devoid of drama. Pep Guardiola and his players could sit back, relax and watch the subsequent contest on distant Merseyside content in the knowledge that, if they win their last five fixtures, the title will be retained.

How Liverpool must have yearned for Crystal Palace to inflict more wounds than Luka Milivojevic’s free-kick, belted inside the post nine minutes from time to halve the deficit and set up an improbable finale.

As it was, the visiting substitute Gabriel Jesus, collecting from Kevin de Bruyne on the counter, would slide a third goal inside Vicente Guaita’s near post in stoppage time to settle the occasion.

That brief period when Palace had pushed for a second aside, this had been all too predictable, a masterclass in the suffocation of a team by blanket possession and the perfect stroll given City have a deficit to retrieve in the conclusion of their Champions League quarter-final against Tottenham on Wednesday. Energy levels will not have been dulled. Domestic momentum has been maintained.

Raheem Sterling’s two goals had established City’s dominance. The forward is appreciated in these parts, his recent dedication to Damary Dawkins – a 13-year-old member of Palace’s elite player development centre who died last month after a four-year battle with a very rare acute lymphoblastic leukemia – upon scoring for England against the Czech Republic having won him friends. His form remains untouchable, his scuttling running full of menace. Palace, a team shorn of first-choice centre-halves and saddled by a dreadful home record, never came close to stifling his threat.

Sterling, found unmarked in front of goal by Ilkay Gündogan’s pull-back, had already scuffed a shot mystifyingly wide of a gaping net by the time he eased City into the lead their virtual monopoly of possession had warranted.

Palace had been breathing a sigh of relief to have won a free-kick in their opponents’ half to launch into the box, only for the ball to be repelled and channelled up-field at such pace on the counter that their defence had no time to reorganise. De Bruyne, permitted to advance to the halfway line, had slid through the sumptuous pass inside Patrick van Aanholt on to which Sterling sprinted. Scott Dann was in no position to overhaul the forward, with the finish dispatched emphatically across Guaita and high into the net.

Other chances were passed up, though the dominance was permanent. Dann somehow blocked from De Bruyne after Gündogan’s simple lofted pass through the middle had struck David Silva on the back and still prompted panic.

Leroy Sané, having waltzed gracefully around three markers, forced Guaita to palm a shot pass his near post. The hosts, so jittery in possession in the knowledge that surrendering the ball at any point could see them shredded, had retired at the interval having mustered nothing other than one Christian Benteke nod-down which Gundogan scrambled clear before the substitute Cheikhou Kouyaté could convert.

The Germany midfielder had been imperious, dictating play in the absence of the injured Fernandinho – the Brazilian should be fit for Wednesday’s second leg with Spurs – with Palace too wary of closing him down lest the ball be immediately shifted into space beyond him. Some of the triangles pinged among visitors were stunning in their simplicity, though they had been constructed under little to no pressure. Only Kouyaté, on for the injured Jeffrey Schlupp, seemed intent upon disrupting City’s rhythm with the lengthy and comfortable rat-a-tat of passes that culminated in Guaita saving from Martin Kelly’s inadvertent touch early in the second half a reflection of so much of the play.

All that was missing was breathing space, with Sterling eventually supplying that just after the hour. Palace had been pulled out of position by the latest flurry of clipped passes and subtle movement, with Sané fizzing in a pass across goal which the forward, untracked by Van Aanholt, side-footed first time with a thud of his boot back across Guaita and into the far corner.

Milivojevic’s free-kick, dispatched after Vincent Kompany and Gündogan had upended James McArthur in a mess on the edge of the City penalty area, would at least prompt a flurry of late urgency from the home side. But that never really threatened to yield an equaliser and from another counterattack with home players over-committed up-field there was Jesus to clip in the visitors’ third at the death.

For a few hours at least, they are restored to the top. - Guardian

Playoffs set to be moved again as Uefa prioritise European club competitions 14:59
Harrington would prefer 12 picks over delayed Ryder Cup 09:06
Australian rugby staring into abyss as another crisis hits 09:03
Ringrose set for new central deal; memories of Björn Borg at Wimbledon 06:51
Seán Moran: What nostalgia tells us about how the GAA sees itself 09:05

1 Australian rugby staring into abyss as another crisis hits
2 My favourite sporting moment: Game, set and couch as Borg takes down McEnroe
3 Garry Ringrose to stay with Leinster as he signs two-year central contract
4 ‘For 25 minutes I ran out of oxygen’: Pepe Reina on his coronavirus battle
5 Sky Sports customers set to save on bills until Premier League returns
Real news has value SUBSCRIBE