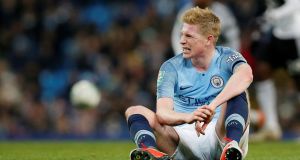 Kevin De Bruyne is set to be out for up to six weeks after suffering ligament damage in his left knee, and Pep Guardiola has admitted Manchester City are stronger with the Belgian in the team.

The 27-year-old sustained the injury in the 86th minute of Thursday night’s 2-0 Carabao Cup win over Fulham. The game was only De Bruyne’s second start following a three-month absence because of ligament damage to his right knee. In January 2016, De Bruyne also seriously injured his right knee and ankle ligaments.

Yet Guardiola is not worried De Bruyne may have an underlying issue. “This kind of injury is unlucky, he’s so strong and he’s recovered so well [from the previous one] which was more dangerous than this one.

“He’ll recover well – we have an excellent medical department. I’m more concerned about muscular injuries. He’s unlucky with this situation. We are a stronger team with Kevin than without him, but we have to live without him.”

Asked how De Bruyne is feeling, Guardiola said: “He was so sad after the game. In the next day he’ll be strong again. He’ll spend the time with his new [baby] boy.”

If City’s prognosis is correct De Bruyne could return to face Chelsea on December 8th. Guardiola hopes by then City may have already secured passage to the last 16 of the Champions League.

“Hopefully we’ll be in the knockout [stage] when he comes back. That will help us in the last part of the season – that he will be fresh and help us to reach our targets. He will be treated by Dr Cugat [in Barcelona] and he’ll be treated here. He’ll be in a really good place to deal with the problem.”

De Bruyne will definitely miss next weekend’s Manchester derby at the Etihad Stadium, though Guardiola is focusing on the wider picture.

“It’s not about the derby, it’s three points like Southampton [on Sunday] – the Manchester derby will be another game. For the fact he was out 2½ months [too] – we’re sad for him, we don’t like injured players. But it is what it is. Unfortunately Kevin is injured, but it is four to six weeks, and he’ll come back.”

Guardiola also praised the qualities of Aymeric Laporte, the centre-back who has started every match this term apart from those in the Carabao Cup.

“First of all his quality and his mentality – he’s a guy who wants to learn. He has arrogance and that’s so important to play at a high level. He didn’t play the World Cup so he’s fresh. He wasn’t selected by France [for the recent internationals] so he’s fresh again.”

Laporte arrived in January from Athletic Bilbao for £57 million. “He’s strong,” Guardiola said. “He needed some periods to adapt but not too much. He had more than 100 games playing against [Lionel] Messi, [Cristiano] Ronaldo and Neymar [in Spain] – that helps.”

1 Sideline Cut: Vignette shows why Bird is the true shark in The Last Dance
2 Dave Hannigan: Trump gets the clubs back out as death toll keeps rising
3 Sonia O’Sullivan: How to keep your competitive edge from going blunt
4 New signings eligible to play for Pro 14 clubs from July 1st
5 World Rugby approve law trials to reduce player contact
Real news has value SUBSCRIBE