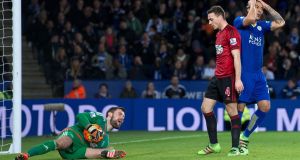 Leonardo Ulloa couldn’t repeat his weekend heroics against West Bromwich Albion on Tuesday night as Leicester were held to a 2-2 draw. Photograph: Afp

Claudio Ranieri insisted he was increasingly confident about Leicester City’s chances of completing a football miracle at the top of the Premier League despite the disappointment of being held to a 2-2 draw against West Bromwich Albion.

Leicester’s inability to beat the league’s 13th-placed side means Tottenham Hotspur can move to the top of the table if they beat West Ham United on Wednesday, but Ranieri said he felt better about his team’s chances than he had been after the 1-0 win against Norwich City on Saturday.

“It was a fantastic match and I am very pleased with our performance,” Ranieri said. “It was just the goal that was missing but we created a lot of chances. We were a little unlucky but I am more confident now than after the game against Norwich.

“Against Norwich, we won the game at the end but we created very few chances. Tonight we created a lot of chances but we drew the match. It is OK – four points from two difficult matches, it is fantastic. We are alive and our spirit is ready to fight again. I am happy – not that we didn’t get the three points, but our performance was fantastic.”

Leicester had gone behind to Salomon Rondon’s 12th-minute strike before fighting back to lead 2-1 at half-time through Danny Drinkwater’s deflected shot and a goal from Andy King. Craig Gardner’s free-kick pulled West Brom level early in the second half and Tony Pulis acclaimed his team’s “heroic defending” during a late onslaught from the league leaders.

“We didn’t panic after the first goal and we managed the ball very well,” Ranieri added. “We built the pressure from the back and our fans were behind us. We scored twice and if we had just a little more luck we would have won the match. Of course, the players were not so happy but I told my players that we are alive and we made a fantastic performance. There is Arsenal, Tottenham and Manchester City who fight for the title, and then there is little Leicester, who are fighting against them. I want you to remember where we started.”

Leicester, 5,000-1 rank outsiders at the start of the season, have been top of the league for almost six weeks and Pulis turned his post-match press conference into a long eulogy about their season. “Leicester City are an old-fashioned team in some ways,” Pulis said. “They play through the pitch quickly, they get the ball wide and they get bodies in the box. They play really exciting football.

“The way the team is set up, the balance, the enthusiasm, the commitment, every Leicester City supporter should be proud of their team. They’re fantastic – their effort, their energy, they never stop. We’ve done brilliantly and it’s a fantastic point for us but now the game’s over I hope Leicester win the league. I am supporting Leicester from now until the end of the season.”