Brazilian duo come off bench to save point for Chelsea 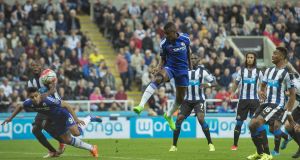 Substitutes Ramires and Willian got Chelsea out of jail as they fought back from 2-0 down at Newcastle to snatch a point.

Ayoze Perez and Georginio Wijnaldum had left the reigning s Premier League champions looking at a fourth successive defeat at St James’ Park, but the Brazilian duo came off the bench to claim a 2-2 draw as Steve McClaren came within four minutes of a first league win of his reign.

It was tough on the Magpies, who turned in their best performance of the campaign to date, but even the most one-eyed of home fans could not deny that the visitors deserved something for their efforts after launching a concerted fightback.

Few of the 48,682 who turned up at St James’ Park expected anything other than a comfortable away win given the quality of the opposition and the demoralising run of four defeats on the back of which McClaren’s men went into the game.

The former England boss had warned that the change he is trying to implement would be painful and slow, but he must have been delighted with what he saw during a pulsating contest.

Newcastle were simply unrecognisable from the disorganised and toothless rabble which had succumbed in such tame fashion to Watford a week earlier and even more horrendously, to Sheffield Wednesday’s reserves in midweek.

They had to defend and defend well with youngster Kevin Mbabu making his league debut in the unaccustomed role of left back as Chelsea moved the ball confidently and counter-attacked at blistering place.

But with Aleksandar Mitrovic, fresh back from his three-game ban, giving the Magpies a focal point, the likes of Vurnon Anita, Perez and Wijnaldum were revitalised.

But as they grew in confidence, the home side started to make an impact and Asmir Begovic was forced into saves from Perez and Daryl Janmaat in quick succession.

It took a flying save from Krul to keep out Cesc Fabregas’s 38th-minute piledriver and Pedro headed wastefully across goal after climbing high at the far post, but the opening goal eventually came at the other end with three minutes of the half remaining.

Perez managed to get himself in between Zouma and Ivanovic and Anita crossed from deep and when the Chelsea pair inexplicably failed to intervene, the striker cushioned the ball before volleying it past the helpless Begovic.

Newcastle extended their lead on the hour from a set-piece when Wijnaldum was allowed to meet Perez’s corner unchallenged and head firmly past Begovic’s despairing dive.

But Ramires ensured a tense conclusion when he thumped a 25-yard drive into Krul’s top corner with 11 minutes remaining, and after Pedro had wasted a glorious opportunity to level, Willian deceived Krul with a curling free-kick to snatch a draw with four minutes remaining.

The visitors might have emerged with all three points had Krul not clawed out Ramires’s 89th-minute header, but that would have been cruel.