Andreas Pereira hungry for more after ‘best day’ yet with United 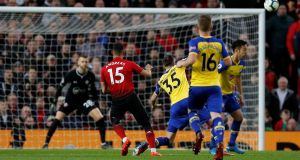 Andreas Pereira is hungry for more after enjoying his “best day” yet as a Manchester United player.

Romelu Lukaku scored twice in the 3-2 comeback victory against Southampton, but it was Pereira who inspired the comeback with a stunning curling effort from distance.

The 23-year-old has been farmed out on several loans and has had his fair share of several ups and down this season, but this fine display could prove a landmark moment for the Brazil international.

“It’s my best day,” Pereira said. “My first Premier League goal, and in a difficult game, so I’m very happy.

“There were a lot of beautiful goals, I think it was a difficult day for the goalkeepers.

“When I received the ball, I saw Luke [Shaw] coming on my left and I was going to give him the ball but it was so nicely on my right foot, I thought I would shoot.

“I’d been practising in training yesterday with Granty [Lee Grant] and it gave me a lot of confidence as I put four in the top corner from exactly the same range.

“So I had a good feeling and I went for it.

“It’s amazing. You feel a lot of emotions and I’m very happy and hopefully there will be many more to come.”

The last-gasp win was a timely shot in the arm – both in terms of propelling United back into the top four and boosting morale ahead of Wednesday’s uphill battle against Paris St Germain in the Champions League.

Alexis Sanchez has joined United’s lengthy list for a match that Paul Pogba is suspended for, meaning Pereira could well start as Solskjaer’s side look to overturn a 2-0 deficit and progress from the last-16 tie.

“It’s a very important win for us,” he told MUTV. “We showed big spirit and, hopefully now, we can take it on to Wednesday and show it again.

“I’m just here to help the team and hopefully I can keep helping.

“The manager shows a lot of trust in me and I’m very thankful for that. I just want to do all I can on the pitch.

“We’re back in the top four and hopefully we can keep going and get the Champions League spot.”

While United celebrate another win, Southampton were left ruing what could have been after Yan Valery opened the scoring with a stunner and James Ward-Prowse made it 2-2 with a fine free-kick.

“I think if you wake up in the morning it feels not good because you lost a game, but over the next week you can take a lot of good things out of this game,” Southampton boss Ralph Hasenhuttl said.

“It is the next game to play then and it starts from 0-0 and against Tottenham it is the next huge challenge to face.

“It is not enough we played for 60 or 70 minutes against such a team in a very good way. We have to be concentrated until the end otherwise there is no chance to get something.

“Then you need sometimes the right decisions for you team from the referee.

“If you want the perfect situation from our team, the perfect goalkeeper, then it’s possible for us to take points against such big teams.”