Oxlade-Chamberlain ruled out for the rest of the season 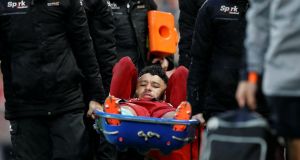 Alex Oxlade-Chamberlain will miss Liverpool’s pursuit of the Champions League and England’s World Cup campaign with the knee injury sustained against Roma on Tuesday night.

Liverpool have not specified the full extent of the injury or a time-frame for recovery but have confirmed that Oxlade-Chamberlain’s domestic and international campaigns are over.

The injury represents a severe setback for Klopp and the England manager Gareth Southgate, who was told of the news in a call from Oxlade-Chamberlain. The Liverpool manager is already without Emre Can and Adam Lallana through injury and has only three established midfielders – Jordan Henderson, James Milner and Georginio Wijnaldum – available for the remainder of the campaign.

Liverpool take a commanding 5-2 lead into Wednesday’s second leg in Rome, where they will be looking to seal a place in the final in Kiev on 26 May. Klopp’s team also have Premier League games against Stoke City, Chelsea and Brighton to try to seal qualification for next season’s Champions League via the domestic route.

“Oxlade-Chamberlain’s season is over for both club and country due to a knee ligament injury sustained against Roma,” the club said in a statement . “The extent of the injury means he is set to miss the remainder of the campaign for Liverpool, as well as the World Cup finals in Russia with England.

“The 24-year-old was assessed by the club’s medical team on Wednesday morning and no specific timescale is being placed upon his return to action at this stage. However, Oxlade-Chamberlain will now begin a rehabilitation programme to enable him to reach full fitness again as soon as possible, returning to action next season.”

Oxlade-Chamberlain has flourished since leaving Arsenal last summer and his absence will also cost Southgate an experienced, in-form midfielder. The injury is likely to strengthen the claims of Ruben Loftus-Cheek for a place in the England squad in Russia.

Loftus-Cheek played in England’s friendlies against Brazil and Germany in November having made an impressive start to his loan spell at Crystal Palace from Chelsea. He was then sidelined by an ankle problem after hobbling out of a defeat to Arsenal in December and missed over three months of the season before returning for Roy Hodgson’s team at Huddersfield Town last month.

The 22-year-old has started Palace’s last three games and Southgate went to check on his match fitness at Watford on Saturday before leaving Vicarage Road to attend the FA Cup semi-final at Wembley.

The England manager is a firm admirer of Loftus-Cheek and would have considered him for the World Cup without Oxlade-Chamberlain’s injury, although the loss of the Liverpool man greatly improves his prospects of featuring in the squad for Russia.