America at Large: MLS still the home of overpaid has-beens 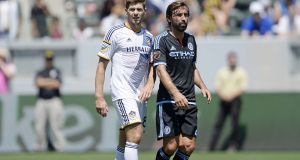 Towards the end of last year’s Major League Soccer season, footage of Andrea Pirlo defending a corner for New York City FC went viral. Well, when we say defending a corner, it was more a Vine of him attending the defending of a corner. Like you attend the opening of an exhibition or the premiere of a movie. He showed up. He was definitely there. But as Kelyn Rowe rose to head home a goal that put the New England Revolution 3-0 up, with several New York defenders attempting to fling their bodies in the path of the ball, the Italian didn’t even flinch.

Draped around the near post, he cut a detached, almost bemused figure, a wide-eyed civilian having accidentally wandered on to the battlefield who remained somehow unimpressed by the hectic kerfuffle. His demeanour that of a beard-scratching dilettante in a gallery, perusing a piece of chaotic performance art, the hurly burly of which he was struggling to comprehend. A five-second cameo of a man who couldn’t possibly have cared less, it perfectly captured the problems facing MLS as it celebrates 20 years in business this coming weekend.

Ordinarily, the start of a new campaign is a time of fresh hope and unlimited aspiration. For MLS, it’s a reminder that real progress is difficult to quantify. Sure, the league has grown to 20 teams and will continue to expand over the coming seasons. The standard on the field has definitely improved, and the average attendance of just over 21,000 is impressive if slightly skewed by Seattle and Orlando pulling in 44,000 and 32,847 for their home games. So much has changed yet so much remains the same.

The inaugural edition kicked off in 1996 with a sprinkling of past-it icons like Carlos Valderamma, a host of overrated American internationals, entire locker-rooms full of journeymen, and, in one sure sign of pure marketing desperation, a Melrose Place actor and half-decent college soccer player named Andrew Shue.

Two decades on, the demographics look remarkably similar. Superannuated superstars in search of easy money? Check. Over-hyped Americans? Check. Journeymen? Check out any of the impoverished back lines that Robbie Keane will be tormenting in coming weeks. Only a token soap opera star is missing.

Eighteen months ago, Ashley Cole laughed off a possible move to MLS, famously telling reporters he wasn’t “ready to relax on a beach yet”. He is now. On Sunday, the 35-year-old will make his debut for the Los Angeles Galaxy alongside another pair of 35-year-olds in Keane and Steven Gerrard. A chastening spell as a bit-part player at Roma finally persuaded the former Chelsea full back that Malibu has unique charms. Even at a cut-rate salary of just under $500,000, there is the unmistakable air of sporting tourism about his sudden desire to sample southern California.

Now, it looks like a goalie no longer able to cut it in the Premier League coming home for some easy money in his football dotage, even reportedly asking for a cheeky $5 million a year as his opening negotiating gambit. He will get less than half that.

Like Messrs Gerrard, Lampard and Kaka, Cole and Howard will make all the right noises about the standard of play – easy to say when earning salaries many multiples of most team-mates and opponents – and this will somehow be regarded as a validation of the policy to overspend on so many who are over the hill. Pirlo gave a masterclass in this type of guff in a feature in the New York Times Style magazine just the other day where, of course, betraying the real reason for his presence in Manhattan, the celebrated sophisticate also waxed lyrical about galleries, restaurants and strolls along the High Line.

This sort of soft-focus coverage is needed to offset some off-season embarrassment. A lawsuit between the Philadelphia Union and its former coach Peter Nowak went public and included a litany of tawdry allegations, including rookies being spanked in hazing rituals. Nowak now manages in Poland but that he was the martinet in charge at DC United when 14-year-old Freddy Adu made his debut for that club offers a possible new perspective about the stunted development of the once bright young thing.

In a major coup this winter, the 21-year-old striker chose the Seattle Sounders over a contract with Werder Bremen. Regarded by some as the most exciting American for a generation, he will earn $225,000 a year. Less than half what Ashley Cole will make on his retirement jaunt around Hollywood. A league with strange priorities. Still.