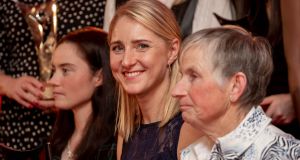 It’s another familiar sign of the times when an end-of-year sportswoman awards end up being less about the women and all about the awards and what they’ve done to deserve them, starting with outright winner Sanita Puspure.

In the end the verdict was as deserved as it was unanimous – another unprecedented year of success for Irish women, and an Irish woman who conquered the world for real, all reflected in the 16th staging of The Irish Times/Sport Ireland Sportswoman of the Year Awards for 2019.

Because while two-time World rowing champion Puspure was named outright winner, all 12 monthly winners – 10 individual monthly winners, and two joint-winners across 11 different sports – were living proof that never before has Irish women’s sport celebrated such a high level of success and achievement.

There was special recognition too for Kerry woman Mary Geaney, who captained her native county to All-Ireland football glory before going on to lead Cork’s camogie team to All-Ireland success, the first player to achieve such a feat, was presented with the Outstanding Contribution to Sport Award.

The Castleisland woman captained Kerry to football success in 1976 – she scored 3-2 in the final win over Offaly, the first hat-trick in a women’s final – before going on to win the first of three All-Ireland camogie medals with Cork. Geaney, who also scored a hat-trick in the 1978 camogie final, captained the team in 1980 – the final against Limerick went to a replay – and won a third medal in 1983.

While her GAA exploits form a huge part of Geaney’s sporting life, it is far from the full story. She also played hockey for Ireland, making her international debut as goalkeeper in 1971 against England. She went on to represent her country 65 times and was a member of the Ireland teams that won the 1977 Triple Crown and the 1983 Women’s Intercontinental Cup. She was inducted into the Irish Hockey Association Hall of Fame in 2010.

Deirdre Veldon, deputy editor of The Irish Times, spoke about the range and quality of this year’s awards: “The Irish Times first appeared in 1859, but readers had to wait 21 years for the first mention of a sportswoman in its pages when it reported – in 1880 – on a visit by the Empress Queen of Austria and Hungary to the stables at Summerhill, Co Meath,” she said.

“Spin forward 160 years and the superlative achievements of sportswomen are being reported and celebrated on a daily basis. Every year surpasses the last with records smashed, precedents set and yet more firsts.

“2019 was no exception, with Irish winners at national, European and world events across a huge range of sports.

“This was a year in which we saw a crowd of over 56,000 at Croke Park for the ladies’ football final. Gymnast Simone Biles performed the first triple double in a floor routine in competition, copper-fastening her reputation as the best of all time.

“A woman refereed a major men’s European match – between Chelsea and Liverpool – for the first time.Ticket touts appeared outside Energia Park in Donnybrook as many thousands braved apocalyptic weather conditions to watch the Irish hockey team beat Canada and qualify for Tokyo . . . and, just this week, a woman has beaten a male opponent, at the world darts championship for the first time. We are humbled in marking the achievements of our own elite sportswomen here today.

“I’d like to acknowledge the contribution of the judges – Greg Allen, Lindie Naughton, Cliona Foley and our own Mary Hannigan – in making selections that get more difficult with every passing year.”

The outright winner was Puspure, who turns 38 on Saturday, and the double World rowing champion now faces into a pressure filled 2020 Olympic year with all eyes on her.

Puspure, who successfully defended her world title in Austria earlier this year, beat off soccer, hockey, GAA, golf, swimming, athletics, boxing and horse racing to take rowing into the winner’s enclosure for the first time.

Lynne Cantwell, Ireland’s most capped women’s rugby player, and now chair of the Sport Ireland Women in Sport Committee, also spoke about other advances made in women’s sport in Ireland, beginning with the recently announced maternity policy.

“I know a lot of athletes are track focused, or pitch focused,” she said, “but it was only towards the end of my career, that I began to understand the back end of sport, and knowing about the policy now, if anyone has transition aspirations into coaching, into leadership roles or coaching or administration, there is a goal there, and what’s brilliant about this year is the diverse range of sports, and the number of junior athletes, and 45 of our 80 medals this year have been junior athletes, and that’s a great sign.”

Also commenting on that changing landscape of women’s sport was Minister of Sport Shane Ross, who pointed out that Ireland’s sportswomen had made a hugely significant contribution to the country’s sporting success during 2019.

“In Ireland,” he said, “we’re lucky at the moment, to have a host of extremely talented and highly skilled sportswomen, who are reaching the top levels of their sport. Through your achievements, you have brought women’s sport to the fore, and have become role models for many young women and girls throughout the country.

“It’s wonderful to see such a large variety of sports represented here today, and in winning these awards, each of you have excelled in your sport, and our highly deserving winners. None have you have reached this success overnight. It has taken many sacrifices and much endurance by you all, to reach the levels you are now at, and I would like to pay tribute and thank you all for your endeavours over the past year.”