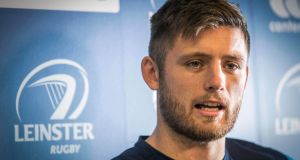 If Ireland lands the Rugby World Cup (RWC) in 2023, it is expected to have a hugely positive effect on keeping top Irish players in Ireland.

In the light of 27-year-old Simon Zebo making a bold move to France and being instantly dropped from the Irish squad, if the IRFU wins the right to host the world event in six years’ time, players will be motivated to stay for a rare opportunity to play in the world’s biggest rugby event in their own country.

“Obviously, it would be amazing. Everyone wants to play in a World Cup for their country. Then, if it was in your own country, it would be absolutely brilliant,” said Leinster outhalf Ross Byrne.

In a significant departure from past RWC bids, on Tuesday World Rugby’s technical review group will make a recommendation as to who they feel is best placed to host the 2023 tournament.

The decision will be made on the basis of their due diligence as well as a transparent points system, which will cover key areas of the bids.

Given the detailed nature of the audit, it should carry significant weight when the 39 members of the World Rugby council cast their vote on November 15th.

Former St Michael’s player Byrne is the perfect age profile to benefit from a tournament six years down the road. At 22 years-old and understudy to Johnny Sexton and sometimes Joey Carbery, he will be 28 in 2023

“I would say for some players who were considering going abroad, if Ireland does get the World Cup, [it] probably would change their minds,” he added.

At the heart of Leinster’s win last weekend against Ulster in Belfast, Byrne has played 32 times for the province compared to Sexton’s 139 times. It is not a bad return given Sexton is 32 years-old, 10 years older than his teammate.

But with Zebo departing and the IRFU reacting swiftly lest anyone be in any doubt of the serious view it takes of players leaving Ireland, a home World Cup would act as a significant natural barrier for emerging players.

“It is a long way away yet. It is something I would love to be playing in. Absolutely,” said Byrne. “It would be brilliant if it was in Ireland because we are such a sporting mad country. The support would be incredible.”

“Ultimately, everyone wants to play in a World Cup. Then, if it is in your own country, that is another thing.”

Byrne is the same age as the currently injured Leinster and Ireland centre Garry Ringrose. Jordan Larmour is still just 20, with both Joey Carbery and Ulster’s Jacob Stockdale, recent Irish squad picks, 21. Leinster winger Adam Byrne, who was also selected on Joe Schmidt’s panel is 23, with Ireland and Lions’ prop Tadgh Furlong 24 years-old. Furlong will be 30 for the 2023 RWC, maturing nicely for his position. Leinster lock James Ryan is also 21.

“You probably have an advantage, or a better chance, of winning it which is probably the ultimate thing you can do in rugby,” added Byrne. “I’d say it probably definitely would sway people. If the World Cup was here, I would want to play for Ireland in the World Cup. 100 per cent. Yes.”

Leinster lock Ross Molony, another Ireland Under 20 player, will be 29 in 2023 and likely to be at the peak of his playing ability as a forward.

Molony captained Leinster for the first time in a competitive game last April against Glasgow Warriors. He agrees with Byrne that if an offer arrived to play abroad, a home World Cup would be a consideration in coming to a decision.

“Yes,” said the second row. “Definitely. My goal has always been to play for my country and people my age who have come up through the rankings – and you get a feel for it when you play underage with Ireland and going away to play the U20s World Cup – it drives you on and you want to play at the next level.

“I suppose there is an interest there. It’s a good option for him [Zebo] and it’s great to see him . . . He’s got a young family and he’s looking out for them. It gets people talking in the changing-room.”