Benetton fashion late draw with Leinster thanks to Tavuyara try

Johnny Watterson at the RDS 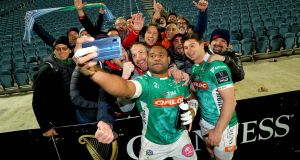 Benetton’s Ratuva Tavuyara celebrates with fans after scoring the try that helped level the final score in the Guinness Pro 14 game against Leinster at the RDS. Photograph: Ryan Byrne/Inpho

It was a perfect night in Dublin city. Leinster were far from it, although it took a last-minute try and conversion for Benetton to draw level. The draw leaves Ulster in second place to Leinster in Conference B with the Italian side in third and still in with a chance of the playoffs with two rounds of games to go.

In a massively physical encounter, scrappy Leinster couldn’t sustain control of the ball or territory and took the lead for the first time in the 71st minute. Struggling to hold it and build phases for long periods it looked like the Italians would become the first league winners in the RDS since they did it last year.

Leinster began with a 20 phase play after four minutes, James Tracy knocking on, which triggered an early swing in momentum. A few minutes later Benetton kicked for an attacking lineout inside the Leinster 22. A Benetton penalty where they opted for another lineout allowed the Italians generate a maul and as Leinster threw in bodies to stop it, hooker Luca Bigi peeled off the back a la Seán Cronin.

Noel Reid was hardly going to stop him with Bigi put Benetton ahead, outhalf Tommaso Allan converting for an early 7-0 lead.

Leinster struggled to put themselves in good positions, an early break up the middle from fullback Barry Daly drawing a penalty for Reid to convert on 17 minutes. But within three minutes Benetton were extending their lead, Allan again with his second penalty to make it 10-3 to the visitors.

It was a changed Leinster team that started, Josh Murphy and a bout of tonsillitis an early intervention in Leo Cullen’s plans, which allowed Scott Penny start the match at blindside flanker, Max Deegan shifting to six.

But Leinster struggled to put much together and while Ciarán Frawley, who came on for an HIA hit Reid, kicked Leinster to within four points, it was the visitors who reacted better to the score, instantly sweeping up field and forcing Leinster to desperately defend their line.

They will take credit from doing that with conviction. But Benetton spent most of the last quarter camped in Leinster’s half and just after Mick Kearney left with what looked like a serious shoulder injury on 37 minutes Benetton were rewarded with a penalty in front of the posts, Allan again converting for a 13-6 lead at half-time.

Leinster arrived after the break with more urgency in their step from the get go. An early penalty and captain McGrath took it quickly to Frawley who sent Deegan on his way. The flanker was grounded just short of the line but a ball whipped infield to James Lowe created enough space for the winger to barge over, Frawley converting to level the scores at 13-13 on 48 minutes.

The first time Leinster were not trailing didn’t last that long. Within seven minutes Benetton muscled up and Federico Ruzzo barged over, Allan again taking his side in front 20-13.

Then eight minutes later Frawley sensibly kicked a Leinster penalty to touch. Deegan rose and the pack drove, Bryan Byrne emerging with a smile on 63 minutes. Again the sides were level at 20-20.

But there were two more tries at the fag end, the first when Frawley burst through on a no-look pass from O’Brien. He also converted for what looked like the winning score.

That only lasted until right wing Ratuva Tavuyara’s dancing feet left Hugh O’Sullivan, Daly and Lowe grasping at air as he sailed in on 80 minutes. They won’t like the replay. Allan converted for 27-27, a deserving end for the Italians who will believe they left more than a draw behind them.