Winning start for Ireland Under-20 team against Argentina 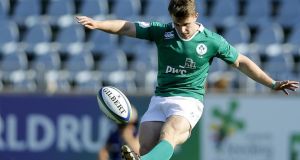 Ireland got their World Rugby Under-20 Championship off to a winning start but it could hardly have been much tighter on a scorching day in Italy.

In the end Ireland needed a dramatic penalty from a player who wasn’t even in the squad a week ago to snatch victory in the final play of the contest.

Tomas Quinlan, drafted in when regular outhalf Ross Byrne was ruled out of the tournament, came off the bench to crown his Under-20 international debut with the match-winner.

And it was far from gimmee territory, indeed it could hardly have been more difficult from 25 metres on the right touchline, but the Cork Con clubman kept his nerve and hit the target with a full thump of his left boot.

“It certainly tested my heart beat,” admitted a relieved Irish coach Nigel Carolan, who must now turn his attentions to Scotland next Saturday.

“I think the character that we showed to come back in the end was tremendous. I think it was pressure maybe, we shouldn’t have had ourselves in, if we took a few opportunities that we had earlier in the game it might have been a different story.”

Ireland deservedly led at the interval and would have been much further than 9-6 in front had they made the most of several goof try chances.

They recovered from a malfunctioning lineout and a superior Argentine scrum to enjoy more possession but had to be content with three penalties from Joey Carbery.

Both sides struggled with the 28 degrees heat on a windless afternoon at Stadio Sergio Lanfranchi in Parma.

Carbery, taking over at outhalf after Ross Byrne was ruled out of the tournament with a back injury, settled well to land an awkward penalty from 35 metres after four minutes.

But Ireland coughed up an equaliser inside a minute Argentine out-half Domingo Miotti made no mistake with a penalty from the 22.

Ireland always looked dangerous going wide but it wasn’t until they sorted out their scrum and set-piece to some degree that they started to make inroads, but Stephen Fitzgerald and late call-up Jacob Stockdale looked dangerous in possession on the wing.

But Fitzgerald knocked on with a clear run to the line after Josh Murphy had fed back inside after fielding one of several probing crossfield kicks from Carbery.

Fullback Billy Dardis was nabbed in the right corner, while Fitzgerald looked to have scored only to be rather harshly whistled back after Carbery’s pass was ruled forward.

Miotti then landed a fine drop goal to edge Argentina in front for the first time and was just short with an ambitious penalty from his own half.

But Ireland finished the half strongly, forcing Argentina to lose three successive lineouts, with Carbery levelling with a penalty and Garry Ringrose producing a sublime pass to put Dardis away but Argentina kept their line intact.

Ireland turned over a lineout inside the Argentine 22 and then won a penalty from the scrum, which Carbery slotted from the right touchline to edge them 9-6 in front at the interval.

Ireland suffered a huge blow just after the restart when Santiago Portillo got over in the right corner, with Miotto landing the conversion to make it 13-9.

Ireland hit back with Carbery kicking a 40 metre penalty and then made it from five from five 25 minutes from the end from 30 metres.

But he missed a penalty after 67 minutes which looked set to prove very costly when Argentina struck three minutes from time to edge back in front when full-back Emiliano Bofelli kicked an excellent penalty from the right.

That looked set to give Argentina their third win in four meetings at this stage but Quinlan kept his nerve to snatch it at the death.

The win will give Ireland badly needed momentum after a stuttering end to the Six Nations and in the process levels out the numbers of victories and defeats Ireland have had in the pool stages of the Under-20 championship, with 21 of each since the competition began seven years ago.

And this one could hardly have been closer before Ireland edged it when it mattered most.