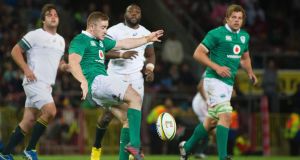 The new Springboks head coach, Allister Coetzee, has claimed that Ireland “weren’t interested in playing” in last Saturday’s first test in Cape Town, when the tourists’ historic win despite playing nearly an hour without the red-carded CJ Stander gave them a 1-0 lead in the three match series.

Coetzee’s remarks came in the context of him stating that the northern hemisphere teams “are actually playing closer to Test-match rugby compared to us when we’re in the Super Rugby environment.

“In Super Rugby we really talk about a ball in hand approach and use it, but there are times when we have to kick it and that balance is the key. There’s a place for the kicking game and if you look at how the Irish put us under pressure, actually we did dominate territory but by a small margin.

“But they weren’t interested in playing. All they did was make it as difficult as possible for us to exit, just put it in behind us, turn us and we were actually bogged down in our own 22 there. They got a drop goal and a chip try and it was a very clever tactic and I don’t think we handled it well but I think we will be better this week.”

Although Coetzee was again generous in his praise of the Irish defence, his remarks appear somewhat churlish. While it’s true that Ireland kicked the ball out of hand 34 times compared with 14 times by the Boks, despite understandably working off less possession, Ireland still conjured nine line breaks to seven by the home side and matched them in scoring two tries, with one of the Springboks brace coming from an intercept.

Nevertheless, Coetzee bemoaned that his side “definitely played too much in our own half”, and maintaining the theme, added: “What you shouldn’t be sucked into is the complete Super Rugby vibe, where it’s almost like a feel-good scenario where we keep ball in hand and run it from everywhere.”

“Sometimes it looks on, but it isn’t and you get shut down in your own half or you turn your own ball over in your own half. Test rugby is a little bit different, the players have a full understanding now about what Test rugby is about. All credit to the Irish, they really scrambled and they worked exceptionally hard when they were one guy short.

“But still, we allowed it to look really good.”

South Africa gave up 22 turnovers, compared to just eight by Ireland, whose recycling was excellent, as was their work at the breakdown and in contact, thereby engineering nine of those turnovers to just one by Boks.

“It’s not just handling errors, but I think it’s our contact skills,” said Coetzee. “That’s where we let ourselves down. When you get stripped, when the ball gets taken out of your hand and not being aware of the collisions, I think we really let ourselves down there.”

“I spoke about our shoulder battle, which is our body height in contact. It was a focus area for us and we weren’t good at that. So, the times we had it we got it right. We got easy yards, we got momentum and we got in behind them and then it was a silly mistake in the wide channel, running laterally or unnecessarily forcing the offload.”

Coetzee is a man quickly under pressure, having become the first coach since John Williams in 1992 to lose his first Springboks’ test as head coach, when following the ending of apartheid and their swift re-entry into the global fold, South Africa were beaten 27-24 by New Zealand in Johannesburg in what was labelled the ‘Return Test’.

Coetzee is now seeking to avoid the ignominy of becoming the first Springboks’ head coach since Williams to lose his first two tests in charge but denied that he was feeling the pressure.

“No, not at all. I was always see the glass half-full, you know that. I’ve been saying so since my coaching days. You will lose, you won’t get it right in all Test matches, whether it’s your first one or your last one, there will be a loser. I think the most important thing or me is I respond, I don’t know what happened to John because I’m not a big fan of history, but I’m looking forward to seeing how this Springbok team responds this weekend and make sure we improve on the work ons for the week.”

He has called up Morne Steyn as a replacement for the concussed Pat Lambie, in an otherwise fully fit and unchanged, extended squad. The 31-year-old Stade Francais outhalf is on holidays in South Africa after last season’s Top 14 champions failed to make the play-offs after finishing 12 this season.

In terms of rebuilding the Boks’ dented confidence, Coetzee said: “That is how life works, this is the first game of the season and your season isn’t defined by the first game. We actually learnt a lot about us as a team, as a group and the challenge will be to respond this weekend.

It has really been hurting the last couple of days, but, look, it’s Monday, the next Test is on Saturday and we have to get over that now and we’re looking forward to Saturday.”