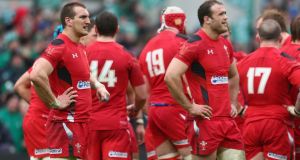 Sam Warburton(left) and Jamie Roberts (right) during the 26-3 defeat to Ireland at the Aviva Stadium. Photograph: Michael Steele/Getty Images

The Welsh are not out of the race for Six Nations silverware this season, but it will require a major recovery act following Ireland’s emphatic 26-3 victory in Dublin.

Wales were horribly outgunned up front by a rampant Irish pack that was led imperiously by breakdown specialist Peter O’Mahony, and they conceded a damaging 16 penalties.

“We knew we couldn’t keep giving away penalties. We were talking about that, but couldn’t change it,” Warburton said. “It was something we knew we had to correct, but we just couldn’t do it.

“They made it very difficult for us over the ball. It was just execution from us, simple things like clearing rucks. We just weren’t efficient there.

“They managed to slow our ball there, and they deserve a lot of credit.

“It was similar to what we experienced in the first-half last year against Ireland, but this time they maintained that for 80 minutes.

“I thought they were great against the All Blacks (last November), so we knew what was coming. But especially up-front - the breakdown, the maul, the lineout - they went better than us.”

Wales coach Warren Gatland was full of praise for Ireland flanker O’Mahony, who maintained his staggering level of consistency in big games this season through another technically-brilliant display.

“He is excellent on the ball,” Gatland said. “You can never underestimate the passion that any Munster player brings to a side. He definitely demonstrates that, when he sings the national anthem and he wears his heart on his sleeve.

“He’s playing exceptionally well, captaining his province, so I’ve been very impressed with him.”

Writing in Wales on Sunday, Price said: “When you see the experience this team possesses, having been together for three years and achieved a Grand Slam and with Lions success behind them, I think that dire display was a crime and the players let themselves down.

“It’s the worst performance I can remember in the Six Nations, especially when you consider what was at stake.

“It is not just the players who will have to take a look at themselves, because the coaches made mistakes with their substitutions, while there remain question marks whether they have an alternative or Plan B.

“Where this leaves Wales for the rest of the championship, I am not sure, because France and England are up next.

“They will have watched that game, and both sides will be confident on taking Wales on up-front. There is a lot to work on. And not much time to do it.”