Ringrose to press his Ireland credentials against Scarlets 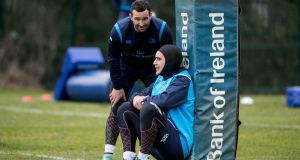 Some questions about scheduling may arise as Leinster face into their second match against Scarlets in a little over two weeks.

While it is not the responsibility of either club to set the Pro 14 fixtures, it was noticeable that last year’s Pro14 League winners Scarlets are playing 2012-13 and 2013-14 Pro 14 champions Leinster over a short period when most of the top international players on both teams are engaged in the Six Nations Championship.

This is a fallow week for international rugby and some faces may filter back to clubs. In last weekend’s game at the Aviva Stadium, Leinster had seven players starting for Ireland and five more on the bench.

Scarlets provided 10 of the starting side selected by Wales coach Warren Gatland and two more players were among the replacements.

The matches may provide a platform for injured players making a return and those in the process of earning a reputation such as Scarlets’ Munster-bound Tadhg Beirne, but somewhere in that system of scheduling value seems lost for the punters and television.

“It is the reality of the way the season is structured,” says Leinster coach Girvan Dempsey. “Unfortunately, during these windows, that happens.

“We’ve always said it is an opportunity for us to blood new guys, to grow that depth in our squad. That’s what we see as a benefit.”

One player who won’t been seen this weekend is Sean O’Brien. While Dempsey seems impressed with the training assignments carried out by the Irish flanker, his fitness falls just short of being available for this weekend. The medics have placed him on the unavailable list despite Dempsey’s enthusiasm.

“Seanie did a volume of running last week which is good and we’re pleased with his progression”, said the Leinster backs coach. “What he is going to do is up that again today and, hopefully, he will come through that.”

The 30-year-old Irish flanker had a procedure completed when non invasive treatment didn’t clear up a hip problem he developed in January. Missing out on a run with Leinster this week means he is unlikely to feature in Schmidt’s plans for Scotland’s visit to Dublin.

Garry Ringrose has begun his bid to recover the 13 shirt before Chris Farrell gets too comfortable at outside centre. Farrell, deservedly earning man of the match plaudits against Wales, should focus the attention of Ringrose, who came through against Southern Kings okay despite a late hit during the game.

“I was very pleased with Garry,” said Dempsey. “Anyone who comes off a long-term injury, it does take time to bed in. I thought he looked sharp on his feet, carried well, his passing skills were excellent.

“What we like in Garry is he marshals that defence in the wider channels and he reads the game so, so smartly. For us, it was really pleasing that he got through that amount of work unscathed and he felt fresh.”

“Playing at 13 pressure arises because of isolation and having to be able to connect with wingers. With 10 and 12 involved in attack off first phase the outside centre is the player organising the forwards and the wingers on the edges.

“You are the link between those players in terms of the defensive width in your wider channels,” said Dempsey.

“There is a lot of onus on that player and Garry has been excellent for us. We’re delighted he got through that work at the weekend.”

Hooker James Tracy also came though his first game back after injury with no concerns, while Rory O’Loughlin will be further assessed this week. O’Loughlin came through his HIA Return to Play Protocols.

Outhalf Ross Byrne is in a similar position and will be assessed over the coming days. Byrne took a knock to his hip against the Scarlets, which requires further attention.

Leinster have a number of high-profile players unavailable including flanker Josh van der Flier, who is on crutches following a procedure to his knee.