Matt Williams: France leaving nothing to chance in quest for World Cup glory 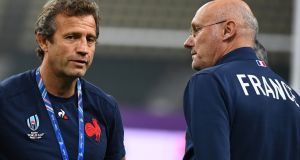 France’s head coach Fabien Galthie and Bernard Laporte, president of the French rugby federation (FFR). Galthie selects players he can shape and who are hungry to learn from his band of technical coaches. Photograph: Gabriel Bouys/AFP/Getty Images

‘French flair’ is the hackneyed phrase used whenever the English-speaking rugby world tries to describe the joys of French running rugby. It implies that French players are born with a gift for the running game.

The reality is that French flair is a big fat white lie. A myth propagated in the English-speaking rugby world that does not recognise the excellent French thinking that created it. Great French coaching created an attacking philosophy that players learned, through an organised and methodical coaching process, not recognised in the English-speaking world.

The lineage of this excellent rugby thinking has its foundation with the great Jean Pratt, a World Rugby Hall of Fame player from the 1950s, who coached France to win their first Five Nations Championship in 1967.

The French team that will run out in Dublin this Sunday is the result of a decade of high performance planning. They have rekindled the spirit of Pratt’s coaching and evolved it with modern concepts.

After hosting the 2007 World Cup the French did the maths and focused on hosting and winning the 2023 tournament for their next money-making venture. For success in 2023, French rugby had to solve their political, coaching and playing problems.

Politically, the formidable Bernard Laporte was appointed president of the French Federation. A former French national coach, minister of sport and the head of their successful 2023 World Cup bid, Bernard is a serious operator.

Like France itself, the English-speaking world has constantly underestimated Laporte’s uncanny ability to muster resources that deliver political and on-field victories. I coached against Bernard and, despite what many have said about him, I always found him to be friendly and personable. He is also a rugby intellectual. Teams he coached used an attacking system that positioned their back row and hooker on the extreme flanks years before the Kiwis copied it.

The underlying reason for the decline in French performances in the previous decade was the shift in power from the French Federation to the presidents of the Top 14 clubs. Behind the scenes, Laporte engaged in a titanic political wrestling match to regain the French Federation’s power.

Unsurprisingly, Laporte won that battle and the French Test players are now rested from the Top 14 the week prior to the Six Nations to attend the international team camp.

Several years ago Laporte’s high performance department began targeting the French playing cohort who would play in 2023. All of the 40-plus club academies – or Centres de Formations – received substantial grants for building or purchasing gym and training equipment.

A national talent identification programme was launched at the Under-16 and Under-18 level as the high performance unit focused on winning the Under-20 Rugby World Cup tournaments of 2018, 2019 and 2020. While the pandemic forced the 2020 tournament to be abandoned, France won both the 2018 and 2019 Under-20 World Cups.

Laporte appointed his former captain, Fabian Galthie, to join the French coaching team before becoming head coach after the 2019 World Cup. Raphael Ibanez, another former French captain, became the team manager. This leadership duo are extroverted, smiling, warm-hearted gentlemen. When it comes to rugby they are both cold-blooded, calculated warriors. In the eyes of their players and the French rugby public, they have gravitas, charisma and panache.

Vlok Cilliers, a South African kicking coach, was also appointed along with William Servat who became scrum coach. The former Racing 92 coach, Laurent Labit, was put in charge of the attack. Julien Bonnaire took control of the lineout, with Karim Ghezal as skills coach. This type of specialised staff appointments were a first for France.

The 2023 World Cup is Galthie’s clear priority. He selects players he can shape and who are hungry to learn from his band of technical coaches.

He immediately cut players who would be too old in 2023. He introduced the French equivalent of the “no dickheads” recruitment policy. Every player had to have a ‘France first’ mindset, in their words and actions. Some high-quality players with equally high-quality egos did not get selected. The message to French rugby was clear. No-one is more important than the team.

The French team that runs out at the Aviva tomorrow, wearing that famous blue jersey with the cockerel over their heart, are the result of that grand plan. It is a team of talent, technical excellence, physical and mental toughness.

The great fear for the rest of the world is that this French team is not the finished article. They have another two years of learning until they will be at their peak. The hope for Ireland is that this young French team can have a bad day, as they did in Edinburgh last year. It’s a long shot but Ireland can win.

But the lesson here is of a far deeper consequence than the result of tomorrow’s game. Fabian Galthie and Andy Farrell were both assistant coaches at the 2019 World Cup. Both inherited losing teams. Both have been head coaches for exactly the same period of time.

Now look ahead to September 2023 when Ireland get on the plane to fly to Paris for the Rugby World Cup. Who do you think will better prepared? Ireland or France?

The honest answer should embarrass us all.