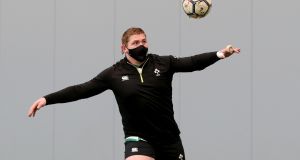 Tadhg Furlong messes around with a football during Ireland training on Wednesday. Photo: IRFU/Inpho

Andy Farrell’s side didn’t play too badly with 14 men at the Millennium Stadium, but lacked the execution at the death to earn an improbable victory.

Now the rest of the tournament looks like a real slog. France travel to Dublin this weekend before Ireland’s trip to play Italy in Rome – a fixture which could easily be a battle between fifth and sixth.

Les Bleus exuded ruthless professionalism as they dispatched the Azzurri in their opening fixture, with Antoine Dupont dazzling at the Stadio Olimpico.

Add in Scotland’s historic win over England – their first at Twickenham since 1983 – and Ireland’s hopes of a successful campaign look slimmer than ever.

A response is needed – here is everything you need to know before France arrive at the Aviva Stadium.

Round two of the 2021 Six Nations Championship, including Ireland’s clash with France in Dublin.

The second round gets underway on Saturday February 13th – it’s another Sunday session for Ireland supporters with Andy Farrell’s side playing a day later.

Ireland’s clash with Les Bleus will be broadcast free-to-air on Virgin Media One (coverage starts at 2pm) and on ITV in the UK (2.15pm). You can also follow the action via the Irish Times liveblog from around 2.15pm.

Saturday’s fixtures will also be on Virgin Media One, with ITV showing England against Italy and the BBC covering Scotland and Wales. Again, you can keep up to date with those games via our liveblogs.

How is the table looking?

The 2021 Championship opened with a nonchalant French evisceration of Italy, Les Bleus running out 50-10 winners against their sorry hosts, whose long winless run in the Six Nations looks unlikely to end this year.

France’s title hopes were boosted further by Scotland’s 11-6 victory over a lacklustre England at Twickenham, with Gregor Townsend’s side emphasising their progression with a win which was 38-years in the making.

A day later Ireland were beaten 21-16 by Wales in Cardiff, a defeat which largely stemmed from O’Mahony’s early red card. Robbie Henshaw and Tadhg Beirne were among those who shone in adversity but any hopes of landing an improbable victory were butchered at the death by Billy Burns, as the outhalf missed touch with a penalty in the last play.

Ireland will be without O’Mahony, with the Munster backrow now banned for three games. There is also no Johnny Sexton or James Ryan – Ireland’s two leaders both left the pitch in Cardiff with head injuries. Billy Burns instead starts at outhalf, with Iain Henderson slotting into the secondrow.

France meanwhile make two changes - Anthony Jelonch comes in for Dylan Cretin in the back ow and Damian Penaud starts instead of Teddy Thomas on the wing.

After being largely bullied by France since the start of the 1930s, recent history between the two sides has seen Ireland gain an upper-hand. Ireland have won six and drawn two of their last 10 meetings with Les Bleus – including a World Cup victory in 2015. However, their most recent meeting came on October 31st last year and ended in a resounding 35-27 win for the French. It will take a lot for Ireland to reverse that form this weekend.

An issue of management

Gordon D’Arcy has been fairly cutting with his assessment of where Ireland find themselves, and suggests malaise was present before O’Mahony was sent off against Wales. And who’s at fault? He believes the blame should be directed further up the tree. . .

“The situation Ireland find themselves in is down to management. From the top down, David Nucifora to Farrell, the professional structures were supposed to ensure that this mess did not occur.

“Nucifora put the coaching ticket together. Farrell, presumably, picks the team. We know from Nucifora’s fascinating press conference late last year that he is not focusing on the 2023 World Cup, nor is he losing a wink of sleep about the amateur game, so the priority is 2021.

“How is that going?

“The performance director has had seven years to avoid what we are currently witnessing. Ireland’s collapse in 2019 was shocking for everyone and stumbling from one disaster to another in 2020 came with plenty of legitimate excuses, but what now? When will Ireland’s lack of a long-term strategy be explained? How long does the Australian plan to stay in his position of power?

“This is a bigger problem than the public realise.”

What are the bookies saying?

France are now firm favourites to end their drought and lift the title in March.

It has been a bitterly cold week but the temperatures are expected to lift by Sunday – we’re forecast to get loads of rain instead.

Leinster submit detailed plans to Government for safe return of spectators 13:15
‘I shredded everyone’s nerves, I’ll try to win more emphatically next time’ 11:08
Nick McCarthy to re-join Leinster from Munster 10:38
All in the Game: Ray Hudson’s Lionel Messi love affair continues 10:00
The Offload: Parsons and Wall can lead Ireland to 2022 World Cup win 10:00
Crossword Get access to over 6,000 interactive crosswords