Dr Jean-François Chermann, the neurologist who stood down Sexton for 12 weeks when he was playing with Racing in 2014 due to concussion issues claimed the Irish rugby captain suffered 30 concussions in his career. Video: VOTN 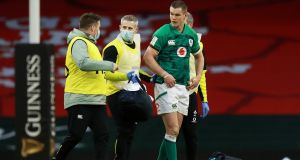 Johnny Sexton of Ireland goes off injured during the Six Nations match against Wales at the Principality Stadium in Cardiff. Photograph: David Rogers/Getty Images

Although the French neurologist who claimed Johnny Sexton had suffered 30 concussions in his career and expressed concerns about the Irish captain facing France on Sunday has subsequently expressed his regret for the damage he caused, the horse had long since bolted.

Dr Jean-François Chermann, the neurologist who stood down Sexton for 12 weeks when he was playing with Racing in 2014 due to concussion issues, yesterday sought to issue a clarification when again speaking to the Paris-based RMC website a day after his remarkable comments.

“For Sexton, we can absolutely not speak of 30 concussions. I should not have cited this figure without any explanation and regret the damage I have done to the player who was my patient and whom I respect more than anything.”

He added: “Clearly, if Sexton hasn’t had a concussion for over a year, that he is asymptomatic at 48 hours, that the tests are good and that the recovery protocol has gone well, there is no contraindication to his playing against France.”

Given the gravity of the subject of head trauma, the contribution of experts in this field, is entirely valid and Dr Chermann, a former amateur player and specialist in sports concussion, falls into that category. But the concerns raised about Sexton by him and a French neurosurgeon, Dr Jean Chazal, who told Midi Olympique “if Sexton plays on Sunday, it’s sad for him”, are questionable given they were said publicly, and also in the week of an Ireland-France game.

Upsetting as it must have been for his family, Sexton was also obliged to respond in public.

“I’m pretty saddened and shocked by the inaccurate reports that were thrown out yesterday,” Sexton told the media in his weekly captain’s briefing.

“We’ve been here before and it is very frustrating and, for me, totally inappropriate that someone I had seen 10 years ago now felt it appropriate to come out and talk to whoever it was and say those things.”

“I’m pretty disappointed but for me I am so used to it that it’s almost water off a duck’s back for me, but for my wife and mum it’s very upsetting. But that’s the world we live in.”

Given Dr Chermann was also the doctor who stood Sexton down for 12 weeks in 2014, his initial comments also raised the question of doctor-patient confidentiality.

“Yeah, I thought there was a patient-doctor confidentiality,” said Sexton. “I’m pretty sure that exists in the world and I just can’t get over the fact that someone thought it was appropriate to say things that weren’t even accurate. That’s the most hurtful thing.

“That’s all I have to say on the matter. We have been here before and we could sit here and talk about it for 20 minutes. But I’m never going to win out because the last time I did it I tried to give the facts and defend myself and I was in the papers for being selfish and all that to the younger players coming through the system, and people accusing me of just looking after myself. So I can’t win.”

Asked to reassure people of his wellbeing in light of the images from the Principality Stadium last week, Sexton said: “Well, I do all the tests that are in place and if I don’t get through them I won’t play. But if I do get through them then I will play. It will all depend on how I do and how I feel. That gives me confidence and that will give the people close to me confidence that I’m okay.

“I’ve never felt any pressure to play after a knock on the head. It was a blow at the weekend, and a good blow and the fact that the docs were out so quick is a sign of how good they are. They don’t let you get up too quickly and that can sometimes make it look even worse as you’re lying there but they’re telling you not to move.”

The issue of head trauma in rugby has been highlighted by the impending legal case against some Unions by former players such as Steve Thompson and Alix Popham, who have also provided detailed and harrowing accounts of their resulting symptoms.

“There’s always a little bit of contact in training but it’s rarely full contact. We’re already reducing all those times. Back in the day, after the knock I got on Saturday, maybe I would have been thrown out there today for example and then you’re susceptible to something else.

“The way that we’re looked after is at the top of sport really, the way rugby is. I feel for the guys, I really do, the guys that are struggling now. I feel good. The reports, I don’t want to go back to it, but they were so inaccurate it just makes me angry.”