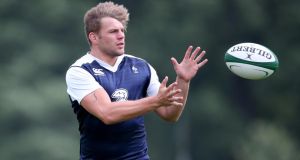 In some respects there is a nuanced divergence between the aspirations of management and players when it comes to Ireland’s first World Cup warm-up match against Wales at the Millennium Stadium on Saturday (2.30).

Everyone wants to win but while Ireland head Joe Schmidt and his assistants will focus on how the various units gel within the team and how well the patterns are implemented, the players are fundamentally aware that they must grasp every opportunity in the three-game preamble – the plan as of now is that the 31-man World Cup squad will be announced ahead of the England match on September 5th – if they want to be a part of the tournament.

Ireland forwards’ coach Simon Easterby suggested that there was traditional Test match intensity to preparations this week and that it didn’t matter one jot what team Wales had selected, an issue on which Leinster’s Jordi Murphy picked up.

“I think he (Easterby) is pretty spot on there. It is a Test match; you are getting a cap for it. They may be warm-up games and there are four of them but every single one is going to matter for whoever is playing to put your hand up.

“There has been that extra little bit of intensity this week. Camp in general has been quite intense with everyone up for it because it (World Cup) is one of those things that only comes around every four years. No one’s name is on the list already.

“The better you play or make those around you play, it’ll stick in the coach’s mind and when it comes around to selection or a time when they cut down the squad, hopefully you have done enough.”

Murphy pointed out that Schmidt demands that players turn up to every camp with the same attitude, focus and attention to detail and that there is no diminution because the matches have been categorised under the heading, ‘warm-up’.

“It’s (Wales) our first game in a while and we are looking to be accurate, get our eye in; there are obviously going to be mistakes. It is one of those things that come when you haven’t played in a while.

“It’s about getting that bit of a gel together again. Obviously we are always going to look to win every single Test we play but I think we are going to look back at those things (performance values) to see how we have gone as a team.”

There are areas within the squad that are ferociously competitive with tremendous depth of quality and none more so that the backrow squabble. Murphy smiles. “There are some guys here (other players have been drafted in outside the 45-man squad) that didn’t quite make it into the squad, the likes of Dominic Ryan, who would be pushing as well.

“You just have to step it up another gear and keep competing. Obviously there are boys like Pete (O’Mahony) and Seanie (O’Brien) who are established players. You can’t give them any easy outs. Everyone is pushing each other so we can be the best team that we can.”

His versatility, the ability to play across all three positions in the backrow, is a personal fillip. “That is one of the things that I can bring to the table and if it helps the coaches then it helps me as well. It just means that little bit of extra homework. I have to get that done. If I get picked I will just have to do my best in whatever position they pick me in.”

Saturday can be a starting point.

1 ‘For 25 minutes I ran out of oxygen’: Pepe Reina on his coronavirus battle
2 Rory McIlroy admits Portrush nightmare was catalyst for his return to the top
3 Sky Sports customers set to save on bills until Premier League returns
4 World Rugby aiming to outline range of options by end of April
5 ‘Magnificent’ Conor Connelly remembered after sudden death
Real news has value SUBSCRIBE