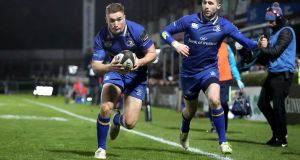 Jordan Larmour has been named in a 36-man Ireland squad for the Six nations. Photograph: Ryan Byrne/Inpho

Fun parlour game. Think like Joe Schmidt. Find the Ireland Six Nations squad – Facebook being their new weapon of choice to relay sparse information – before copying and pasting the names into a position-specific list.

The unrelenting McFadden is, like Kearney, still only 31 years young so

Farrell’s power game, having barely missed a beat despite a six week lay-off following knee damage sustained against Argentina, must be close to the starting XV.

Not that Robbie Henshaw and Bundee Aki, probably in reverse order as Aki is a natural foil to Johnny Sexton at 12 while Henshaw has run at 13 for Leinster of late, will be of a mind to make way.

The back three of Kearney, Keith Earls and Jacob Stockdale seems certain. Earls, when fit, has been outstanding since the June tour and despite Stockdale’s obvious defensive fragility the 21-year-old continues to ooze class in attack.

The halfbacks are set in stone but Luke McGrath is piling up evidence to convince Schmidt that Kieran Marmion must make way. Ulster scrumhalf John Cooney is unlucky to miss the cut.

However, Seán Cronin is deservedly returned to the squad – it made no sense to remove him last year – but only because Niall Scannell and James Tracy are injured.

John Ryan holds on as tighthead cover for Tadhg Furlong despite losing his Munster jersey to Stephen Archer but Andrew Porter’s time is coming.

Ultan Dillane and Quinn Roux make the roster but, increasingly, the locking question – who partners Iain Henderson? – is between the established Devin Toner or rising force of James Ryan.

Adam Byrne, who needed knee surgery after being capped against Argentina, was not mentioned, nor was Tracy (elbow), while Stuart McCloskey and Darren Sweetnam have been dropped.

McCloskey has been usurped by form Munster centre Rory Scannell while Sweetnam’s spot is gobbled whole by Leinster’s sensational 20-year-old.

According to Girvan Dempsey, Larmour’s coach at Leinster and an 82 cap Ireland international fullback, his future is at 15.

“He’s very exciting from there,” said Dempsey. “He can play fullback, right wing and centre but the more space he has the more damage he can do.”

Larmour finished at outside centre in Saturday’s victory over Glasgow when Kearney replaced Henshaw.

“His ball-in-hand skills are excellent. The speed and accuracy of his passing is excellent. He is constantly learning. He has shown that he’s not fazed by big occasions, which has been a real asset.

Sometimes you get a young player who is on the scene and he’s got that exuberance but he’s daunted by the occasion but Jordan hasn’t been fazed and he’s got a really good grounding. Whether he is selected for higher honours, it is ultimately up to the other coaches to decide that.

“If he continues to improve the way he’s improving, yeah, it’s ultimately up to the national coaches, the make-up of their squad. He’s certainly putting his hand up for selection which is all you can ask.”

Larmour displacing Kearney for a European game seemed significant, if not permanent, but Schmidt’s call on February 1st will tell all if his time is now or later.

Meanwhile, Cistercian College Roscrea and Leinster have undergone mediated talks to avoid a day at the High Court over the ineligibility of nine schoolboy rugby players. The regulations that permit players to switch schools during the Leaving Cert cycle or repeat sixth year and still play in the schools cup will be “reviewed by the Leinster Rugby Schools Committee and the threat of legal action has been withdrawn by Cistercian College, Roscrea.”

IRELAND SQUAD (for games against France and Italy)