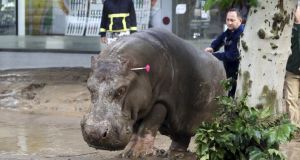 A man directs a hippopotamus after it was shot with a tranquilizer dart on a flooded street in Tbilisi, Georgia, on Sunday. The Emerging Ireland rugby squad were ordered not to leave the hotel while wild animals prowled the streets. Photograph: Beso Gulashvili/Reuters

were “shocked” after being caught up in deadly floods in Tbilisi that have left at least 15 people dead and wild animals on the loose.

Emerging Ireland were recovering from their opening game of the Tbilisi Cup in the Georgian capital when an intense downpour turned a stream into a sweeping torrent.

The flood, in the early hours of on Sunday, burst open enclosures of the city’s zoo, leaving dangerous animals, including lions, bears and a hippopotamus, to run amok.

Ireland’s team hotel, the Marriot Courtyard, is little more than a mile from the worst affected area that also saw homes washed away in landslides.

The squad, including senior Ireland internationals Rhys Ruddock, Jack Conan and Rob Herring, were ordered not to leave the hotel while wild animals prowled the streets.

Ruddock said: “We became aware of what was going on the next morning. People were messaging us asking if we were okay. We couldn’t really believe what we were seeing; it was a shock. It only sank in when we saw people gathering outside the hotel paying their respects. Then it really hit home.

“We had to stay in our hotel until we went to training, which took longer than usual, but that was understandable with the amount of chaos on the roads. It certainly overshadowed the game on Saturday.”

At least 15 people are known to have died, among them zoo employees trying to rescue animals. Others were washed away in their cars and a dozen more are still missing.

Hundreds of animals also perished, while many more have been shot in the streets of central Tbilisi amid fears of attacks. Wolves are thought to have fled to the wooded mountains that surround the capital.

Monday was declared a national day of mourning in Georgia, though the Tbilisi Cup, in which Ireland are competing for the second time in three years, will go ahead. Emerging Ireland team manager Joey Miles said: “A tragedy like this puts a game of rugby into perspective. We want to pass on our regret and respect to the Georgia people for the tragedy they have suffered.

He added: “As far as the tournament is concerned, it has to go on and we want to play in the spirit of the competition. That is the best thing we can do. We know how important this tournament is to the Georgian Rugby Union as well as ourselves as a development tool for our players, so we will all have to try and rise above.”

Georgian rugby players were among the thousands that helped with the cleaning up operation. The national team will wear black armbands and there will be a minute’s silence ahead of today’s second round of games at the Avchala Stadium.

Ruddock said: “This is an exciting squad to be a part of because the age-profile is very young but there is plenty of experience within the group. Everyone wants to put their hands up for selection but we must improve from the first game [25-0 win over Emerging Italy] if we’re going to catch the eye.”