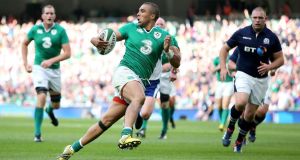 Ireland fullback Simon Zebo breaks free to score a try in the 61st-minute against Scotland in the Rugby World Cup warm-up game at the Aviva Stadium on Saturday. Photograph: Dan Sheridan/Inpho

This was a sloppier, less accurate Irish performance, but Scotland put up a more meaningful and exacting challenge than Wales a week previously, which made it a more meaningful exercise from the perspective of a grateful Joe Schmidt.

In many ways, Schmidt and his coaches will probably welcome so much more material to work on after this reality check.

Les Kiss particularly will be disappointed by the concession of another three tries for the second week in a row, and afterwards Schmidt noted they only conceded three in the entirety of last season’s successful Six Nations defence.

David Denton, Blair Cowan and Hugh Blake carried hard into an Irish defence that lacked line speed and was a tad too passive. Such was the lack of impact hits that it only needed one or two missed tackles to then stretch Ireland, with Scotland able to recycle the ball relatively easily.

As both defences became more porous in a second half that saw Ireland thrice regain the lead, the home side missed 23 tackles.

The passivity and David Denton bouncing Mike Ross led to Blair Cowan’s try, before Ross and Jack Conan were caught on their line and their heels when Henry Pyrgos scored, and then Gordon D’Arcy backed off Sean Lamont before he took out both the centre and Conan to slip Peter Horne over.

Chris Henry, Conan, Devin Toner and Ian Madigan were all credited with 13 tackles, while the other main threat was Sean O’Brien: lightning quick to manoeuvre himself over the ball for a poach and so difficult to shift, he engineered four turnovers, three of them penalties.

Ireland eschewed all shots at goal until Madigan missed a 75th minute insurance penalty, although Scotland did defend the Irish maul better than Wales, coming through and targeting the ball winner as soon as he hit the ground to good effect. They also used blockers in the paths of Irish chasers very effectively.

However, Ireland responded well in the second half, by resetting the maul after Tuohy, as catcher, had been brought to ground for Sean Cronin to peel off and score, and the maul might have yielded a penalty try late on as well.

Given Schmidt’s focus on combinations, and how efficiently they clicked, the front-row and the scrum also worked especially well, with Mike Ross locking the tight-head side and Dave Kilcoyne driving through a couple of times on the Scottish scrum.

Kilcoyne had a bit of a mixed bag, conceding a couple of penalties and missing a tackle, but carried strongly and, more importantly, scrummaged well. Cronin atoned for a first undercooked dart by consistently hitting his men, mostly the banker target that is Toner.

Interestingly, when he came on for his debut, Nathan White looked comfortable on the ball in this environment and contributed to both the third and fourth tries.

It was always going to be difficult for Tuohy to force his way into the squad after Donnacha Ryan’s 80-minute return last week, and it just got a whole lot more difficult for him. The same is probably true for Gordon D’Arcy, who eclipsed Mike Gibson as Ireland’s longest serving player on the day.

The back row also worked well together, notably in defence, and also when Conan – at the high point of a good debut – offloaded to Chris Henry to spark the breakout that led to Sean Cronin’s try.

This was one of only three Irish offloads, compared to 11 by Scotland.

From the vantage point of the cheap seats, Isaac Boss did not have the best of games, a little slow to the breakdown and sometimes passing a little too high, although he had injected more tempo before Eoin Reddan arrived to increase both the speed of Ireland’s game some more as well as, seemingly, the running options.

Madigan’s game grew accordingly. His brace of inside passes for Dave Kearney and Simon Zebo for the latter’s try, especially after his step inside, were good moments on the gain line.

Arguably the game’s most skilful moment was his perfectly measured cross kick for Luke Fitzgerald to gather and score adroitly on the run in the highlight of a mixed performance.

Madigan also found a nice rhythm on both his line-kicking and off the tee, landing all four conversions for a four from five return – in contrast to Paddy Jackson’s four from seven last week.

However, he missed a couple of tackles and Schmidt clearly felt he might have added more bite to his defence, and maybe led the line a bit quicker.

Fitzgerald and Zebo had never played together and it showed, as moves broke down on four occasions. It takes time to develop an understanding.

While Schmidt said Zebo still needed to improve some of his defensive lines at full-back, he was very good in the air and again showed his ability to beat men and locate the try line. He also has a big left foot to emulate Rob Kearney, even it wasn’t seen here.

By contrast, although he was also good in the air and took his try well, Fitzgerald also made a mite too many errors for his own liking.

Tommy Bowe showed his aerial skills in a decent, solid outing – although the ball didn’t come his way that often. Dave Kearney arguably upped the cutting edge and physicality when he came on.

Jared Payne played with typically unfussy accuracy, completing all of his 13 tackles, making time for himself on the ball and timing his passes to put others into space. Fittingly, he had the final say with a tackle that forced a spillage to end the game.

The official attendance was supposedly 31,700, but even by modern-day exaggerated standards that figure looked risible. The actual attendance looked more like 20,000-25,000, and was an indictment of the ticket pricing, marketing and publicity around this match.

Wales in a fortnight will be a different matter.