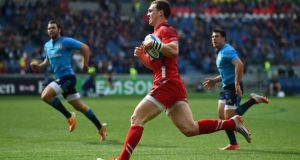 George North is fit to play in Wales’s World Cup warm-up matches after missing the final 10 weeks of last season on the advice of a specialist having been concussed three times in less than five months.

The Lions wing has taken part in Wales’s training camps in Switzerland and Qatar this month. The emphasis was more on conditioning than rugby, but when the squad, which returned from Doha on Wednesday, regathers on Sunday evening, the focus will be on the first of the warm-up matches, against Ireland in Cardiff the following Saturday.

“We are conscious of the knocks that kept him out of rugby,” said the Wales head coach Warren Gatland, “and we have not done much contact in training so far. George has trained well and is looking good. He is in great shape and although he is a young guy, he has a lot of experience.”

Gatland said that the tighthead prop Samson Lee, who had an Achilles tendon operation towards the end of last season, remained a doubt to make the 31-strong World Cup squad, which will be announced on August 31st while the fullback Liam Williams is unlikely to play in any of the three warm-up games because of a foot injury.

“Samson is doing pretty well but it is touch and go for him in terms of making the World Cup squad,” said Gatland. “We may have to take him as an injured player and hope that he is fit to play in the second or third match. Liam is unlikely to play in any of the warm-up games.”

One player who is fit is the No 8 Taulupe Faletau, whose planned move from Newport Gwent Dragons to Bath has been thwarted by Gatland. The two sides had agreed a fee and the Lions’ forward wanted to join last season’s beaten Premiership finalists, but the Wales head coach blocked the transfer in the interests of the national team.

“The agreement we have with the regions allows dispensation for two players on new contracts who are based outside Wales,” said Gatland on Sky Sports News. “We already have those next season in Jamie Roberts and Rhys Priestland. If Taulupe went to Bath he would not be qualified for Wales after the World Cup. Unless something changes, he will be staying in Wales.

“We are limited in what we can do in Wales, unlike England, because of our limited playing base and we only have four professional teams. I wanted to make sure that the players were protected in the agreement: I want to make sure they are not taken advantage of and lowballed on salaries because they want to pay for Wales. It is about getting the balance right and being flexible.”

Wales are in the toughest World Cup pool, having been drawn with the hosts England and fellow 2011 World Cup semi-finalists Australia. All three countries are in the top six of the World rankings, but when the draw was made in 2012, Wales were outside the leading eight.

“It is a hard pool that could come down to points difference,” said Gatland. “We play Uruguay first and England have them last. We have spoken about trying to take the referee out of the equation and making sure results do not come down to a decision.

“I do not understand why the World Cup draw was made so early when you have teams fourth fifth and sixth in the world with two semi-finalists in 2011 in the same group.

“It does not make sense to me that the draw was made in 2012. When you look at the football World Cup, the draw was made a year later for a tournament that was a year earlier. We have to put up with it and it would be nice to see England and Wales get through from the group. We are in a good place and should be really strong in the next few years.”

Wales were knocked out of the World Cup by France in the 2011 semi-final after their captain, Sam Warburton, was sent off by the referee Alain Rolland 20 minutes in. Despite playing for the final hour a man short, they only lost by a point and missed two late kicks that would have won the game.

“I still have bitterness from that World Cup,” said the Wales defence coach, Shaun Edwards. “It was a quite controversial refereeing decision for an offence which is regularly given as yellow now. It took our dream away from us and I am thankful to have another World Cup. You do not get that many.”