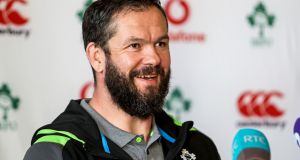 Andy Farrell: “If something is not up to scratch and it is not good enough you need to be honest about that.” Photograph: Laszlo GeczoInpho

Conceding three tries to Italy in the final 25 minutes last Saturday week at the Aviva Stadium ought to have given Wales and Ireland’s other remaining opponents in this year’s Six Nations grounds for hope. The flip side of this coin is that it afforded Andy Farrell the opportunity to re-establish standards, something which he evidently did.

The systematic and individual errors first saw Ireland overload the narrow side and be beaten on the open side, then become disconnected in their chase before finally becoming bunched once more, leading to them being outflanked in the outside channels each time. These were indicative of a drop in standards which Farrell has hammered home since then, all of which, he believes, will put Ireland in a better place for the visit of Wales.

For sure, it’s preferable these mistakes were made after taking a 42-0 lead against Italy than this coming Saturday. Farrell also began his defensive review by highlighting how four of Ireland’s eight tries emanated from the pressure exerted by their defence. Nor did he give the players the hairdryer treatment.

That’s what Gats is pretty good at, galvanising and getting a team together

“It is not the wrath at all, it is honesty. If I am not being honest with any player then I am doing them a disservice and honesty to me is super-positive whether you think it is negative or not, or positive or not, because it means that I care about the progress. And if something is not up to scratch and it is not good enough you need to be honest about that.

“I started the review of the meeting with the four tries we scored through the pressure from our defence, so it’s not all bad. It’s not all bad. The last quarter is an example for me to say what’s acceptable and what’s not. Having said that I think it puts us in a pretty good place moving towards this weekend.

“I am using the example of the Italy game because we’re 40 points up and we slackened off with our intent, and that’s not what we’re about, because I think we’ve shown some pretty good intent in previous games before that. The competition gets a whole lot tougher from here on in, and we will at the same time.”

With Wales committed to more of a passing and offloading game, and no Jamie Roberts figure in midfield, Farrell is acutely aware that this Welsh attack is liable to pose more questions than some previous ones, although he was quick to dismiss notions they’ve swapped Warrenball, whatever that is, for Scarletball, whatever that is.

“I’m not buying the Scarlet ball. I’m not. I’m buying the Rob ‘Howleyball’ because Rob made a statement straightaway coming back from the Lions about playing a more expansive game with two pivot players. He has made that change and the (Welsh) lads are reaping the rewards on the back of it.”

In truth Wales have probably been on this trek since playing some adventurous running rugby in the 3-0 Test series defeat to New Zealand in June 2016, although that said, Farrell also believes many of the old traits remain.

“They certainly have got a smile on the face the way they are playing at this moment of time,” said Farrell. “It is there for all to see that their forwards are getting the ball through the hands quite a bit more. They are playing with a tremendous amount of width but there is a reason they are able to do that is because they are winning the gain line and getting quick ball.”

“Look, things don’t change. I have played against Wales plenty of times before and the main threat had been them playing through you and playing nice and tight, and trying to keep hold of the ball and suck the life out of you etc. We will be ready for all of that.”

Farrell has an additional insight into the ways and methods of Warren Gatland, Rob Howley and Neil Jenkins through the last two Lions tours. The quality he attributes to a side coached by Gatland is “hard to beat”.

“They certainly play for the full 80 minutes as we saw last week against England. Look, they play for him don’t they? And they don’t just play for Warren, I think Warren will be the first guy to say he is very lucky with the staff he has got there. I have a lot of respect for every single one of them, from Paul Stridgeon in Strength & Conditioning, we have worked with him. I think Rob (Howley) is doing an excellent job with their attack. I’m sure other Welsh fans are excited about that.”

“Jenks (Neil Jenkins) is a superb kicking coach and Shaun Edwards has been doing a phenomenal job in the defensive role for as long as Warren has been in the job. So they are a good team together. That’s what Gats is pretty good at, galvanising and getting a team together.”

Farrell maintained that the hamstrung Tadhg Furlong and Iain Henderson are “hitting their targets” but as they are still not training fully both players, and certainly Furlong given how he pulled up against Italy, must still be considered very doubtful.

Against that, Farrell reported that James Ryan trained fully, while in the absence of Robbie Henshaw, Garry Ringrose looked in “great nick” after rejoining the Irish squad yesterday. “He’s short of game time, obviously, but he’s a class player and he slotted straight back in today.”