Cistercian Roscrea had fought back to level matters in Donnybrook classic 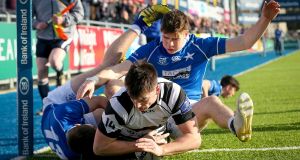 This came as advertised with Roscrea’s props Michael Milne and Josh Wycherley leading the charge of a dominating pack.

The task of playing into a strong wind suited their pick-and-go with the back five forwards difficult to handle too.

But St Mary’s had their own strengths, recognising they had to meet muscle with muscle while looking to create on the outside.

In addition, they had a maul that put them in position, the first time for fullback Ruairí Shields to hit the lead penalty.

The physicality of Milne in the carry was a problem and flanker James Corcoran and number eight Neal Moylett were prominent in setting up right wing Jay Culleton for a fine try.

Roscrea’s difficulties in dealing with restarts put them in a perilous situation from where St Mary’s quick-acting scrumhalf Adam McEvoy stole over on the short side of a five-metre scrum.

The tit-for-tat continued when Roscrea’s pressure in close caused an infringement for outhalf Billy Foley to level it up at 8-all.

St Mary’s should have moved ahead when failing to execute down the right and forcing a forward pass to deny Carey on the left.

They were only getting warmed-up as centre Timothy MacMahon slalomed through for a stunning try and hooker Gavin O’Brien exploited a soft shoulder for two tries in six minutes, both converted by fullback Shields.

Roscrea were far from done as captain Milne crashed to the line and fullback Tadhg Bird took off on an electric burst from inside his half for a spectacular try. Foley kicked both conversions to square it at 22-all in the 55th minute.

From there, St Mary’s produced the plays and the composure necessary for Shields to put Carey away for the first of a double that was again created by Shields in the 67th minute.

There was still time for Milne to claim his second converted try from a lightening raid just as the clock turned red.