Ulster will have to channel their defiant mindset to repel Wasps 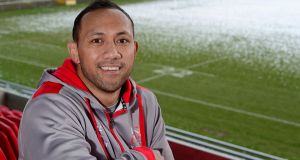 Ulster outhalf Christian Lealiifano is playing his final game for the province before returning to Australia. Photograph: Arthur Allison/Pacemaker

Craig Gilroy’s fractured cheekbone sustained in the victory over La Rochelle is the latest in a ridiculously lengthy injury list, although the enforced change that saw Darren Cave introduced into the centre and Louis Ludik move to the right wing had a positive effect on the outcome last week. It is little surprise that in Gilroy’s absence Les Kiss has elected to retain that shape in the backline.

Ulster were wonderfully obdurate in their defiance last week and will have to channel that mindset for what is an even tougher remit in Coventry. La Rochelle ran out of ideas reasonably quickly and once their offloading game was largely shut down, they didn’t have much depth to the playbook.

That won’t be the case for Wasps, who possess a sharp cutting edge off set-piece and first-phase play in which Danny Ciprani is a key contributor and unlocks space for a very quick back three. It’ll be interesting to see how Jacob Stockdale copes with the lightning-quick Christian Wade, although one suspects that the English international might have one or two anxiety issues when the roles are reversed.

Up front Kyle McCall is underrated as a player, particularly his work-rate. Harlequins got after the Wasps scrum; one suspects Ulster would be content with parity. Irish international Kieran Treadwell returns to the secondrow with Iain Henderson, outstanding last week, as was Rory Best, joining a backrow that contains Sean Reidy and the ever improving Nick Timoney.

Ulster outhalf Christian Lealiifano is playing his final game for the province before returning to Australia and pre-season training with the Brumbies. He would dearly love to sign off by helping his team-mates to a place in the quarter-finals of the Champions Cup. A victory would guarantee that outcome.

Speaking during the week, he admitted: “We can compete with the talent that we have in the squad and the direction the team is going in; I think we are improving each week. The inconsistencies in our game are something that frustrates us internally as well. We are just trying to get our game going.

“The way that the Ulster people have taken to me is something that I am truly humbled by. Grateful is a word that sticks out for me.” How the supporters would like to be beholden to him after 80 minutes in Coventry.

Wasps coach Dai Young was a little more upbeat in recent days than immediately after the gut-wrenching defeat to Harlequins. Springbok Juan de Jongh returns to the centre in place of Leinster old boy Brendan Macken, who drops to the bench. James Haskell is suspended and there are a couple of changes to the pack.

Ulster’s marquee players stood up last week and were counted, and it is going to take a repeat of that, coupled with a dollop of good fortune. They must take every chance and defend with vigilance and precision that hasn’t often been apparent. A win would rank in the top five European performances by the province given the circumstances.