Toulon win battle of bullies against Saracens in Cardiff 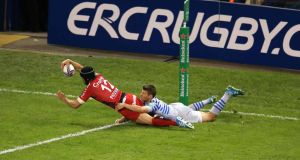 Toulon’s Matt Giteau scores a try despite the tackle of Saracens’ Richard Wigglesworth during the Heineken Cup Final at the Millennium Stadium in Cardiff. Photograph: Billy Stickland/Inpho

RC Toulon 23 Saracens 6: The new superpower in the European game duly emulated Leicester (2000-01) and Leinster (2011-12) by retaining the Heineken Cup, and thus become the last side ever to do so.

Toulon achieved the feat in a somewhat anti-climactic final under the closed roof of the Millennium Stadium, weathering a strong Saracens start to boss the game with their mix of experience and know-how, especially at the breakdown, along with no little skill in two well-worked tries, and won pulling away.

It was everything you’d expect of a heavily Anglo-Afrikaans influenced final, ie full of big hits, heavyweight collisions and scarcely any vision. This final encapsulated modern day rugby. As one Irishman watching said of it, it reminded him of his days bouncing on Leeson Street. Ultimately, Toulon’s victory proved they had the better, and more high-achieving and experienced South Africans, as well as just more of them.

Their array of World Cup winners added to their collection of medals, with Bryan Habana thus emulating Brad Thorn as well as team-mates Bakkies Botha and the retiring Danie Roussouw as the only players to have garnered World Cup, Super Rugby and Heineken Cup winners medals. The Toulon trio will now be heavily fancied to add the club’s first French Championship next Saturday with their revenge final against Castres.

Along with their strength in contact and in depth, Matt Giteau, graced the game with one moment of class, but their trump cards were their backrow, Juan Smith and Juan Fernandez-Lobbe putting in the hard yakka for Steffon Armitage to do what he does like no-one else, to add another four turnovers to his 17 to date in the tournament, as well as 14 carries and 16 tackles of his own as he eclipsed the English incumbent Billy Vunipola.

There was also the unerring game management and kicking of that ultimate pro and role model Jonny Wilkinson, who kicked 13 points in his farewell game on British soil the day before he turns 35. “It’s a wonderful feeling,” Wilkinson said afterwards. “I can’t say enough how proud I am to be a part of this team and to be able to play in this competition. Our season has one more week but this is something I will take with me forever.”

Misleadingly, the early gains were all for Saracens, right from Owen Farrell’s kick-off. The hang time for his opening effort permitted the chasing Chris Ashton to empty Lobbe of the ball and very nearly his innards as well. Matt Stevens earned a penalty from the game’s first re-set scrum for Farrell to open the scoring.

When Toulon then came calling, Alain Rolland penalised Steffon Armitage for holding on, although a virtually prostrate Brad Barritt could not have been supporting his own body weight.

It quickly became apparent that the Millennium surface was, as usual, particularly ill-equipped for set scrums as Xavier Chiocci was again penalised after a couple of lengthy re-sets.

It was brutally fierce. Accordingly, to add to the game’s lack of flow, four times Rolland went to the TMO. One of them led to Fernandez Lobbe rightly being binned for tugging the airborne Alistair Hargreaves and thus forcing an awkward fall. Visibly upset, upon his return the Argentine warrior set about atoning with some gusto as he threw himself into the fray.

Farrell missed the ensuing 45-metre penalty as well, and in one of the game’s crucial stages, Toulon won the ensuing 10 minutes by 7-0 thanks to a try carved in Australia by the one player with vision and special awareness on the pitch, Giteau with some help from compatriot Drew Mitchell.

Chiocci made a strong carry into Stevens – his one victory in their duel all day – and when Wilkinson switched the point of attack with slow ball on half-way, Giteau kicked left over his right shoulder into space for Mitchell to chase and gather above Alex Goode on a wicked third bounce. He offloaded infield to Giteau, who had hared off as soon as the ball left his boot, to gather high above his head and race in by the corner flat.

Wilkinson landed a superb conversion and when Saracens sought to work their way back into the game they ran into a brick wall with Smith and Fernandez Lobbe the pillars. In one phase, Smith put in a monster hit on Dave Strettle and then wrestled Farrell over the touchline, and after a lineout maul and rumble by Steffon Armitage, with Rolland playing advantage, Wilkinson knocked over one of his sweetly struck, trademark right-footed drop goals to ensure a 10-3 lead as Toulon finished the half with all the psychic energy.

Nor did it change significantly after the resumption as Toulon went on putting in big hits, even though a third scrum penalty against Chiocci enabled Farrell to briefly make it 10-6 and prompt the loosehead’s departure. But such is Toulon’s phenomenal playing resources that they could comfortably replace their entire tight five before the hour mark.

By then, Wilkinson had restored their seven-point lead after Fernandez Lobbe felled Billy Vunipola following his charge off the base of a scrum and, inevitably, turnover king Armitage was over the ball in a flash with his un-shifting strength and low centre of gravity.

Cometh the hour, the outstanding Smith and Fernandez Lobbe combined to ensure Toulon retained their Euro crown. Wilkinson saw Strettle shooting up and slipped out of his tackle to release Mathieu Bastareaud, and he carried hard to take out two players and offload for Smith on the touchline. He had Fernandez Lobbe in support on his inside and their exchange of passes drew Alex Goode for Smith to score.

Wilkinson even tagged on another difficult conversion, and then a penalty after Bryan Habana milked Farrell’s shoulder block with a theatrical dive which would have been more in keeping with the ensuing Champions League final, and was rightly ticked off by Rolland as well.

From there on, they cruised to the finishing line.