Connacht set for toughest of tests in return to Champions Cup 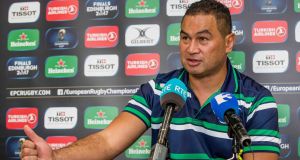 After a three-year absence, Connacht are back, and this time on the back of their own efforts. No one has had to wait longer to dine at Europe’s top table again and only Zebre have less experience of competing in the Champions Cup. That the most decorated club in the competition’s history are the visitors for a third time only adds only adds to the sense of occasion.

Given Toulouse won here handsomely on their previous visits five and three seasons ago, Saturday night ought to also provide a quick barometer as to how far Connacht have progressed in the interim. They take their place as Pro12 champions, and having rediscovered some of the elan which earned that historic breakthrough title last May.

This is therefore another celebration of sorts, albeit with the need to deliver. Unlike the previous two occasions the aristocrats of European rugby came calling to the west, Connacht have earned the right to host the four-time champions. “Everything we did last year was about getting into the Champions Cup,” said Pat Lam. “Now we need to perform.”

A little surprisingly, Quinn Roux has been recalled at the expense of Ultan Dillane, who will nonetheless assuredly have half an hour or so make an impact off the bench. In starting Quinn, Lam assuredly has Toulouse’s mighty pack and 6-2 split on their bench in mind.

The concern about Eoin McKeon, one of last week’s casualties, has been allayed in an otherwise unchanged line-up, and it is a testimony to the performance of Caolin Blade last week that despite Kieran Marmion (try scorer in Connacht’s shock win away to Toulouse three seasons ago) being fit again, he has to be content with a place on the bench. He is joined there by Sean O’Brien, who is included in his first match day squad of the season, ahead of last week’s try-scorer off the bench, James Connolly.

Thus far this season, the one-time great entertainers of European rugby have sought to dominate physically up front through their scrum and lots of one-off runners. They are lacking a creative spark at half-back, particularly at out-half, where the prosaic qualities of Jean-Marc Doussain have been retained.

Toulouse have made six changes to their starting line-up in last week’s lost to Clermont, when labouring to a bonus point even when Clermont suffered two yellow cards.

“Shucks, they’re big,” is how Lam describes Toulouse. “I’ve been watching them the last couple of weeks and doing some work on it. Massive physicality, but there are opportunities for us there, but more importantly for us some confidence continues to build.”

“While we’re aware of the excitement surrounding the fixture, our focus has been on ensuring our week’s preparation has followed our normal routine of getting better every day. With Toulouse having a squad full of quality internationals, it’s vital we bring our team structures and systems to give us a chance of winning.”

“It is important to start well in Europe and the fact that we are at home gives us a massive boost. Hopefully as many of our supporters as possible from Sligo, Leitrim, Roscommon, Mayo and Galway can get to the game to create that special Connacht atmosphere. I know it will mean a lot to the boys and it will play a big part in getting us over the line.”

It’s been seven years since the last of Toulouse’s triumphs in this competition, and they have managed only quarter-final appearance in the last four years, when soundly beaten by Munster in Thomond Park three years ago.

They may well discover the Sportsground has echoes of the Limerick citadel, and the Saturday night kick-off ought only add to the home crowd’s fervour. What’s more, whereas a wild and wet night in the west might well have been more suitable to Toulouse, the forecast suggests morning showers will give away to a generally dry night.

For these sides have almost flipped in style and approach since they last met. This time it is Connacht who will have licence to counter-attack, and trust their running, recycling game, and move the Toulouse juggernaut around. The higher the tempo, the better.

In any event, all the more so after an equally helpful eight-day turnaround, Connacht will have a go. Of that we can be sure.