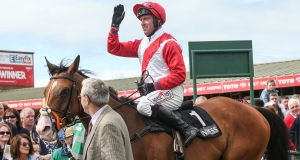 The Jessica Harrington-trained Sandymount Duke, which is owned by Rolling Stones guitarist Ronnie Wood, has been ruled out of Saturday’s Grand National. Photograph: James Crombie/Inpho

Ronnie Wood has learned you can’t always get what you want, as his colours will not be carried in the Grand National. The Rolling Stones guitarist owns Sandymount Duke, who had been due to line up on Saturday but has suffered a last-minute setback.

“We’re very disappointed,” said Jessica Harrington, who trains the horse at her stable in Co Kildare. “It’s nothing too serious but it’s bad enough to stop him running. Maybe we’ll be able to bring him back for another go next year.”

The National has a long history of celebrity owners trying to win it and the comedian Freddie Starr succeeded with Miinnehoma in 1994. Gregory Peck travelled over from Hollywood to see his Different Class finish third in 1968. Several famous owners had their eyes on this year’s National when entries were made in January but Give Me A Copper, part owned by Alex Ferguson, and Black Corton, in whom TV presenter Jeremy Kyle has an interest, have also been withdrawn in recent days.

The absence of Sandymount Duke means the 14-year-old Bless The Wings is guaranteed a place in the race if connections decide to run him. That could mean his trainer, Gordon Elliott, having 13 runners in the race.

Harrington still hopes to be represented by Magic Of Light, presenting a big opportunity for the low-profile jockey Paddy Kennedy. Having had an 11-year career, Kennedy qualified to take part in the National in February, when he rode his 10th winner over fences.

Ultragold has been committed to the National by his trainer, Colin Tizzard, rather than Friday’s Topham, a shorter race over the same fences, which he has won for the past two years.

Tizzard said: “If we went out and won the Topham again we’d spend the rest of our lives thinking we should have put him in the National. He’s a completely different horse over those fences, so we’re going to give that one a crack.” Harry Cobden, who has been aboard for both of the Topham wins, has already been booked for Warriors Tale, so Tom O’Brien will take the ride.

Ultragold, in common with most of his stablemates, ran below form at the Cheltenham Festival, where he was pulled up in the cross-country race, but Tizard hopes for a better showing this time. “We were flying around Christmas, we couldn’t do anything wrong. From February, it’s been quiet.

“Can’t put your finger on it but we’ve had this before at Cheltenham time and they got to Aintree and Punchestown and they were flying again. We’ve just got to grin and bear it, carry on training as we do. They’re not machines, are they? Stables go in and out of form.

“They look lovely just now, their coats have come through. The proof of the pudding will be in the races. I didn’t think there was much wrong with them going into Cheltenham but they weren’t good enough on the day. Things can change in a month, we’ve seen that before, so we’re looking forward to the week.”

Tizzard is especially pleased with Elegant Escape, one of six runners in Thursday’s Betway Bowl. He had expected the horse would be done for the season after running sixth in the Cheltenham Gold Cup.

“He is beautiful. We were thinking: ‘We’ve had plenty of races out of him this year.’ But he’s sort of made us run him really, because he looks so well. He’s got a bit to find on the figures but he’s working the best I’ve seen him ever work, working really well. So there’s no reason not to go there and he wasn’t very far behind Clan Des Obeaux at Cheltenham, was he?” – Guardian