Commentator was respected, trusted and admired to a degree rarely achieved 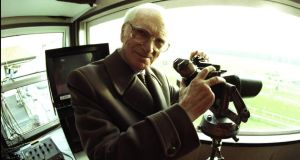 Peter O’Sullevan was rightly called ‘The Voice of Racing’ and not just because he turned in a 50-year shift behind the microphone at a time when the greatest legends were being made across all sports.

High-born in Kenmare in 1918 - his father was the resident magistrate in Killarney - and with raffish interests, he was accepted as the embodiment of racing by blue-blooded breeders and hard-nosed punters alike, respected, trusted and admired to a degree rarely achieved by any commentator.

Many factors combined to give O’Sullevan tremendous authority: his gravelly tones, his informed insight, the poise and dignity with which he carried himself. His diction was clipped and precise. Grey-haired from the early 60s, he was a grandfather figure to several generations of racing fans, an upright and responsible guide to a louche demiworld.

Any review of the big moments in horse racing history would come with an O’Sullevan soundtrack. Arkle’s Gold Cups, Red Rum’s Grand Nationals, Grundy against Bustino in the race of the century, Dawn Run and Desert Orchid pounding up the Cheltenham hill: those were all his.

To his unmasked dismay the BBC managed to fumble away the rights to all the British Classics, the Cheltenham Festival and the Prix de l’Arc de Triomphe during his career but, despite the technical excellence and deep knowledge of Simon Holt, Richard Hoiles and others, no other race-caller has come close to the standing he achieved.

He rose from a sub-editor’s job at the Press Association in late 1944 to his first Grand National commentary in less than four years, suggesting that competition for the work was not then what it is now. But he might easily have fallen at the first. Having done much preparation for a particular Cheltenham race on which the BBC was to test his skills, he was told at the last minute that he would be trialled on a different race, earlier on the card. By his own account he did not cope well.

A letter to O’Sullevan reported a BBC bigwig’s initial reaction: “Although he would not enthuse, he feels that perhaps, with a little more practice, you would probably do a very much better job.” Soon after his debut his mother told him: “Darling, I saw you on television yesterday and you looked absolutely ghastly. I do hope you’re never going to do that again.”

He received complaints that “I spoke too quickly and became incoherently excited towards the finish”, a difficult description to square with the measured delivery which became so familiar. Unlike almost any other race-caller, O’Sullevan had the poise and confidence to allow occasional seconds to tick by without the accompaniment of his own voice, if the field was moving undramatically between fences down the back straight, his restraint making him a pair for tennis’s Dan Maskell.

It seemed that he was always in control and indeed the many tales of successful bets and winning tips at big odds that punctuate his autobiography suggest he had a pretty firm grip on the game. But he loved to tell of the backstage chaos that beset the early years of outside broadcasts, the trouble that he and his colleagues endured which no one now has to face.

Covering the 1949 Grand National for radio from a ground-level position by the first fence, he and his friend Clive Graham, assisting him, climbed on to the roof of a toilet to get a better view. To maximise his chance of staying on the sloping iron roof, O’Sullevan removed his shoes and socks. Graham kept his socks on and duly slid over the side as the runners approached.

In the face of such challenges O’Sullevan remained collected. But he came close to losing his cool on those occasions when his own black and yellow silks were carried in a major race.

When his Attivo won the Triumph Hurdle, the commentator fretted that Banlieu was “getting up” when that rival had fully three lengths to make. As his Be Friendly raced alone on the stands’ rail in the Vernons Sprint, he cried: “It’s difficult to tell how he relates to those on the far side”.

Both times he listed the victorious connections in his professional habit, seconds after the horses had passed the post, pausing only briefly as he recorded that the winner was “owned by . . . Peter O’Sullevan”.

He was 79 by the time he retired in 1997 and it had seemed for some time that his eye for mid-race detail was not quite as sharp as before. There was also the occasional self-indulgent shortening of the name of some familiar old chaser, notably ‘Dessie’ for Desert Orchid, which was not to everyone’s taste.

But he did a fine job, late in his career, in coping with the chaos of the 1993 National, rendered instantly void by a false start of which most of the jockeys were unaware. After his two co-commentators gave a fairly straight description of the first circuit and handed back to him in the grandstand, he did a journalist’s job in clarifying the situation, telling millions of viewers: “Well, here’s one of the greatest sensations ever in the Grand National. Officially it really cannot possibly be a race.”

And he remained, to the last, capable of delivering a crisp, not to say withering verdict if he found himself disappointed. Called to the stage at the 2012 Derby Awards along with other former BBC employees, the corporation having been given the President’s Award for its long service to the sport, O’Sullevan plainly felt the gong was ill-timed at just the moment when the broadcaster was giving up on the last vestiges of its racing coverage. It was, he said, like congratulating the king on his decision to abdicate.

Now his acute judgment and precise language exist only in memory, along with the thousands of races he described. Racing has generally made poor use of its archive footage but is getting better at it and visitors to the 2014 Grand National were met with excerpts from O’Sullevan’s commentaries on the race. It was an instant thrill, a nod towards a great tradition and an undeniable association with quality. Guardian Service