Champion jockey goes to Exeter on Tuesday for three rides 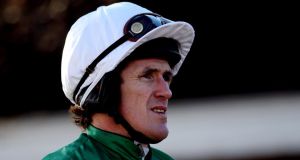 Two winners at Kempton yesterday took Tony McCoy to 3,998 for his career and he will go to Exeter today for three rides and a serious chance of reaching an extraordinary milestone.

But the man who has dominated jump racing for 18 years appeared less than positive about his prospects of achieving 4,000 today.

Asked to assess the Exeter three, he described them as having “bits of chances, I wouldn’t say they’re good chances. Flemenson won at Uttoxeter the last day, he’s probably my best chance. Well Hello There fell last time and I think the one in the hurdle is probably not much good.”

McCoy has earned the right to speak frankly about his mounts but there are many races to be won with horses of modest ability, so it would surely be a mistake to write off his chances of hitting 4,000 at Exeter. He was, after all, uncomplimentary about Foundation Man, even as the pair stood in the winner’s enclosure here.

Foundation Man, said McCoy, is “just a bit gormless, he’s a slow learner, I’d say . . . But he obviously has ability and he’ll hopefully improve each day he runs.”

Earlier, McCoy had hacked up in a novice hurdle aboard the 4/11 shot Captain Cutter, who he described as “a nice type of horse. He . . . needs a bit of experience but he’s started off on a good note.”

If McCoy falls short of 4,000 at Exeter he will have more chances tomorrow, either at Chepstow or Warwick. “I’ll go wherever someone might give me a winner,” he said.
Guardian Service