Kingman to give John Gosden and Prince Khalid Abdullah a first Irish 2,000 Guineas

War Command leads team of five for Aidan O’Brien, who is looking for a 10th win 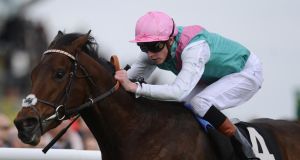 James Doyle lands the Greenham Stakes on Kingman at Newbury and is fancied to secure his first Classic success in today’s Tattersalls Irish 2,000 Guineas at the Curragh.

Kneejerk comparisons to Frankel might seem odious now on the back of Kingman’s Classic defeat at Newmarket three weeks ago but he is hot favourite to gain compensation in today’s Tattersalls Irish 2,000 Guineas and can prove a class-apart.

A win for Kingman would be a first Classic success anywhere for Kingman’s jockey James Doyle, and a first Irish 2,00 Guineas for both trainer John Gosden and owner Prince Khalid Abdullah, whose world-famous pink and green colours have in the past mopped up all the British and French Classics.

The Saudi owner has never won any of this weekend’s Group One Curragh prizes but with a pair of Dermot Weld-trained fillies representing him in tomorrow’s 1,000 Guineas, and Frankel’s brother Noble Mission supplemented into the Tattersalls Gold Cup, there is a chance of a top-flight hat-trick for the Juddmonte behemoth.

That is a feat Aidan O’Brien pulled off six years ago when Henrythenavigator landed the colts Classic at HQ to add to an earlier English Guineas win. But those banking on the champion trainer making it a 10th Irish 2,000 Guineas success today are banking on a different pattern emerging. Team of five O’Brien’s 2012 and 2011 winners especially, Power and Roderic O’Connor, finished out of sight at Newmarket before improving dramatically in time for the Curragh. War Command leads a team of five from Ballydoyle today and with first-time cheek-pieces, substantial progress is expected from his ninth to Night Of Thunder and Kingman three weeks ago. However, an unsettled weather forecast, and the possibility of ground conditions getting softer, is hardly ideal for the O’Brien number one and there are plenty who believe that Dermot Weld’s Mustajeeb, runner-up to War Command in last year’s Futurity, represents a better home hope considering he beat older horses in the Amethyst a fortnight ago.

Shifting Power, fourth in the English Guineas, has been supplemented but everything in the race looks to revolve around Kingman.

A huge juvenile reputation got even shinier with a devastating Greenham win that did provoke comparisons to Frankel’s 2011 victory in the same race. Concerns prior to the Newmarket Guineas centred on fast ground but ultimately it was the field splitting into two groups that proved the most significant element to the first Classic of 2014.

Considering Night Of Thunder drifted alarmingly in the closing stages, maybe time will prove he was the best horse in the race. But he had been hammered by Kingman in the Greenham and Gosden still suspects the split field led to a scenario where the horse challenging last held a major advantage.

Good horses The going at the Curragh could be very different to Newmarket and Kingman has never run on slower than good. It is also 21 years since the Newmarket runner-up went one better in Ireland and some good horses, including Giant’s Causeway, have failed to do what was expected of them in that time.

However, prior to his last start, Kingman looked a potentially exceptional miler and there were enough extenuating circumstances in the English Guineas to make this Irish Guineas look his for the taking.

Soft ground conditions could yet rule out Sole Power from today’s Temple Stakes at Haydock but the concentration of sprinting power at Eddie Lynam’s Co Meath base is such that he is able to pitch both Slade Power and Viztoria into the Group Three Greenlands Stakes. Very testing conditions will be ideal for the Abbaye winner Maarek, but Slade Power is expected to contend for all the top sprints this season.