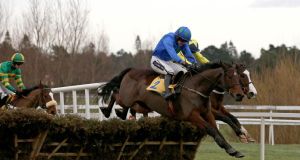 A “Round Two” atmosphere is set to surround Sunday’s BHP Irish Champion Hurdle at Leopardstown and bookmakers reckon it is heavy odds-on that Hurricane Fly will again put the young pretenders, Jezki and Our Conor, in their place.

It is just over three weeks since the world-record breaking, dual-Horse-of-the-Year superstar beat off his two rivals in style around Leopardstown’s two miles in the Ryanair Hurdle and Hurricane Fly is a 1/2 favourite to repeat the dose in this weekend’s €110,000 highlight.

All five that lined up in that Ryanair are among the seven still left in the big race ahead of tomorrow’s forfeit stage and the two others are Hurricane Fly’s stable companions, Un De Sceaux and Annie Power.

Younger stars
Despite the potential shown by both of those younger stars, Hurricane Fly remains the undoubted Mullins number one and he will emulate Istabraq (1998-2001) if successfully bringing off a four-in-a-row in Ireland’s most prestigious hurdle prize on Sunday.

Victory will ensure a 19th Grade One prize and make him the oldest Irish Champion Hurdle winner since the 11-year-old Brave Inca in 2009.

“The champ is definitely the one to beat and I reckon the crowds will travel to see him again,” said Leopardstown’s chief executive Pat Keogh yesterday.

“We would normally anticipate a crowd of about 8,000 for the day but with Hurricane Fly, and both Jezki and Our Conor, who are clearly very good too, I think we can outperform that on Sunday.”

Jezki finished two and a half lengths off Hurricane Fly three weeks ago after a barging match with Our Conor in the straight that hardly represented Tony McCoy’s finest hour. He could again be joined in the race by another JP McManus-owned runner, Captain Cee Bee, although that horse is also topweight for Saturday’s big €100,000 handicap, the Boylesports Hurdle.

Youngest winner
In that Ryanair, Our Conor was beaten a total of six lengths in his first start over flights since a Triumph Hurdle rout last March and if Hurricane Fly is something of a veteran at 10 years old, Our Conor is aiming to become the youngest winner of the race in twenty two years.

Both Our Conor’s trainer Dessie Hughes and Jezki’s handler Jessica Harrington know what it takes to land the Irish Champion having scored with Hardy Eustace (2007) and Macs Joy (2005) respectively.

Paul Nolan’s star could be reopposed by Willie Mullins’s Felix Yonger who beat him in a Grade Two at Punchestown in November.

Dunguib pleased connections with a third to Rule The World at Naas on Saturday, his first run in almost three years, and Philip Fenton’s former Cheltenham Festival-winning star could try next to repeat his 2011 victory in the Red Mills Trial Hurdle at Gowran next month.

Rising star
That could mean a clash with the rising star Un De Sceaux but a relieved Fenton reported yesterday: “He’s one hundred per cent sound thankfully. I was very pleased with the performance and was surprised he was still on their tails turning in. There’s not a great deal for him, but I think going to Gowran makes sense.

“After everything he’s gone through, though, it’s very important to take things one step at a time.”

Gowran could also be the next stop for another Fenton star who impressed on his return to action last week, with the Red Mills Chase an option for Last Instalment.

Cut to as low as 33/1 for the Cheltenham Gold Cup after his comeback third in last Thursday’s Kinloch Brae at Thurles, Last Instalment has emerged unscathed from his first start in nearly two years and although having Leopardstown’s Hennessy as an alternative a week earlier, Fenton also mentioned the Gowran race as a possibility.