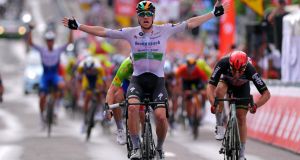 San Bennett: “I know we’ve a fantastic team for this race, and we should able to have a good shot in a lot of stages here.”

Fausto Coppi said that, and he knew what he was talking about, the original Il Campionissimo won who the Tour de France not once but twice.

“Cyclists live with pain. If you can’t handle it you will win nothing. The race is won by the rider who can suffer the most.”

Eddy Merckx said that, knew what he was talking about too, winning the Tour and practically everything else in cycling not once but five times.

Nowhere is that capacity for suffering more essential than in the winning of a three-week Grand Tour, only there is also the argument in cycling that those at the back of the peloton suffer just as much as those at the front, especially if all the pain isn’t occasionally punctured by some moment of euphoria such as a stage win.

Five years ago, at the age of 24, Sam Bennett started his first Tour de France, in what was his second season with German professional team Bora–Hansgrohe (then named Bora-Argon 18). The best Irish junior in some time, the youngest ever winner of a stage in the Rás, he’d showed early promise in 2015, winning the final stage at the Tour of Qatar, and the first and third stages at the Bayern–Rundfahrt, earning him his first professional points classification jersey.

Starting in Utrecht, by the time the Tour actually reached France, after stage 4, Bennett was already 31 minutes behind the race leaders, suffering badly, not helped by a hernia on his diaphragm. As the race progressed Bennett could hardly even eat, and abandoned after stage 16 and the mountain stage from Bourg-de-Péage to Gap.

A year later, Bennett started his second Tour in better form, winning the first stage of the Critérium International in Corsica, but crashing on the opening stage in Normandy, breaking two fingers in his right hand. Only Bennett knows what suffering he endured to make it to the finish, because he did, the last of the lot in 174th position, five hours, 17 minutes and 14 seconds behind yellow jersey winner Chris Froome.

He didn’t go out on a complete whimper, finishing ninth in the bunch sprint on the final stage from Chantilly to Champs-Élysées, his last place overall finish also earning him the distinction of the lantern rouge, from the France “red lantern”. First awarded in 1903, six years before the first maillot jaune, it goes to the last finisher of the Tour who has perhaps suffered most of all in not abandoning.

Fast forward another four years, and as the 2020 Tour is set to roll out into its greatest unknown, given the increasingly grave uncertainties around how it will endure the latest French spike in Covid-19, Bennett finds himself among the handful of riders predicted to win the opening stage in Nice, and with that take the leaders maillot jaune for at least one day.

It is 33 years since Stephen Roche was the last Irish rider to wear that jersey, into Paris as it turned out, and this is a position that Bennett has both craved and earned. He might well have started a couple more Tours since 2016, only Bora-hansgrohe were always going to make Peter Sagan their lead sprinter, or else their German rider Pascal Ackermann, meaning Bennett had to be content with either the Giro d’Italia or the Vuelta a España, which to a large extent he was, winning three Giro stages in 2018, and two in the Vuelta last year.

That position is now altered significantly, Bennett transferring, after some lengthy off-season negotiation, to his self-proclaimed dream team in Belgian outfit Deceuninck-QuickStep, once home Tom Boonan, Paolo Bettini, Mark Cavendish, Marcel Kittel and Elia Viviani, among many other Tour stage winners. He’s admitted to having the team poster on his wall growing up in Carrick-on-Suir, and reckoned “when you see that blue moving through the peloton, it’s intimidating for a lot of teams”. They are after all known as the Wolfpack.

Attitude has perhaps altered a little too. When Paul Kimmage interviewed him before his 2015 Tour start, he started out by saying “Sam Bennett has always struck me as a bit of a pup”, only to later add that “actually no, that’s not quite true, the word he [Bennett] uses is ‘prick’.”

This year Bennett’s stars have aligned in other ways, Saturday’s opening stage starting just a short distance from his home in Nice, all of which brings some added pressure: with dreams begin responsibility.

“It really feels like my whole career has been a build-up to this moment and this opportunity, and I feel quite a bit of pressure in that sense,” Bennett said at the team press conference on Thursday, carried out on Zoom given the race restrictions around Covid-19.

“Normally I should be looking forward to it, but I know how hard the roads are, so it’s going to be difficult. But it’s very nice to be racing on home roads, well, second-home roads, and really excited to be back in the Tour, and especially here with this team, I know we’ve a fantastic team for this race, and we should able to have a good shot in a lot of stages here.”

His improved sprinting form since 2016 hasn’t happened by accident either, and for that Bennett can still partly credit Bora–Hansgrohe. Their team coach Dan Lorang extolled the benefits of the software INSCYD, which creates a detailed physiological profile of each rider, and in Bennett’s case the issue was not having enough endurance to keep fresh for the final sprint. Inevitably that meant more suffering in training.

Deceuninck-QuickStep is his dream team in every sense: a late change will see the in-form French rider Rémi Cavagna replace the injured Czech rider Zdenek Stybar. They were by some distance the most successful team in 2019, with 68 UCI wins, the only goal beyond Bennett’s stage wins being Julian Alaphilippe’s quest to do likewise, and perhaps take the malloit jaune into Paris and become the first French winner in 35 years.

That, Bennett admitted, all brings pressure, especially when each stage will be played out against the backdrop of Covid-19, no rider or team entirely sure if the race will even make it to Paris. On Thursday, Nice and the surrounding Alpes-Maritimes were one of 19 regions put back on red alert.

“It would mean a lot to get a stage win here. It would settle me as a rider and make me a lot more confident. I think you just have to accept there is pressure, that’s part of the moment. I suppose when you have that pressure it means that it really means something to you, so you just have to embrace it. I think we just have to take each day as it comes. The first day is possibly a sprint but at the same time it might be a really hard day. You have to stay open minded and survive as long as possible.”

Surviving in the Tour being another word for suffering, especially if all the pain isn’t occasionally punctured by some moment of euphoria such as a stage win.