This was a 201st NFL victory for Brady, surpassing Payton Manning’s previous record 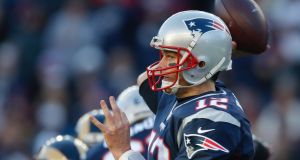 New England Patriots quarterback Tom Brady makes a pass during the second half of the NFL American football game against the Los Angeles Rams at Gillette Stadium in Foxborough, Massachusetts. Photograph: PA

Tom Brady celebrated a record 201st NFL victory as the New England Patriots continued their dominance of the AFC with a 26-10 win against the Los Angeles Rams.

Brady surpassed Peyton Manning’s record for the most wins by a quarterback in the NFL, marking the occasion by throwing for 269 yards and a touchdown as the Patriots improved to 10-2.

The Patriots lead in the AFC East increased as the Miami Dolphins lost 38-6 to the Baltimore Ravens.

The Ravens raced into a 28-0 half-time lead, with Joe Flacco throwing for 381 yards and four touchdowns to inflict a first defeat in seven on Miami.

The Dolphins did not register a score until Ryan Tannehill threw a touchdown in the fourth quarter, by which point Terrance West had scored and Dennis Pitta had two touchdowns.

Flacco picked out Breshad Perriman with a 53-yard touchdown pass to complete the scoring.

The Dallas Cowboys, who beat the Minnesota Vikings 17-15 on Thursday for their 11th victory in a row, became the first team to lock-up a playoff spot courtesy of the Washington Redskins’ 31-23 loss to the Arizona Cardinals.

Carson Palmer threw for 300 yards and three touchdowns for the Cardinals, while David Johnson scored twice.

The Detroit Lions cemented their place at the top of the NFC North standings with a 28-13 win over the New Orleans Saints.

Golden Tate made a 66-yard touchdown when there were only six points separating the sides early in the fourth quarter as Matthew Stafford thew 341 yards and two touchdowns as Detroit improved to 8-4.

The Seattle Seahawks routed the Carolina Panthers 40-7 to ensure their fifth winning season in a row — matching the franchise record.

The Panthers benched quarterback Cam Newton for the opening drive — reportedly for a dress code violation — but then watched backup Derek Anderson throw an interception to set up Seattle’s opening touchdown. It went downhill from there on a miserable night for the Panthers.

Thomas Rawls ran for 106 yards — with 103 and two touchdowns in the first half - while Russell Wilson threw for 277 yards and a score.

In the closest game of the day, the Kansas City Chiefs secured a thrilling 29-28 victory over the Atlanta Falcons.

The Falcons recovered from 27-16 behind to lead 28-27 with 4:32 remaining as Matt Ryan picked out Aldrick Robinson with a five-yard touchdown pass.

Atlanta native Eric Berry, who had returned an interception for a 37-yard touchdown in the first half, picked off a two-point conversion attempt and ran it back 99 yards late on to give Kansas City the win.

The Chiefs remain one game behind the Oakland Raiders, who engineered their biggest comeback in 16 years to beat the Buffalo Bills 38-24.

Oakland trailed 24-9 early in the second half but scored 29 straight points to improve to 10-2. Derek Carr threw for 260 yards and two touchdowns.

Atlanta’s loss drops them into a tie atop the AFC South alongside the Tampa Bay Buccaneers, who made it four straight wins with a 28-21 road win over the San Diego Chargers.

Jameis Winston threw a 12-yard touchdown to Cameron Brate midway through the fourth quarter to put Tampa Bay on top for good.

The New York Giants could not get out of their own way as their six-game winning streak came to an end with a 24-14 loss to the Pittsburgh Steelers.

Eli Manning threw two touchdowns, but was also intercepted twice, both times close to the goal line, while the Giants managed only 56 yards on the ground.

The San Francisco 49ers fell to an 11th straight loss, folding 26-6 to the Chicago Bears as Jordan Howard ran for 117 yards and three touchdowns. 49ers quarterback Colin Kaepernick was benched in the fourth quarter after going one-of-five for just four yards.

The Denver Broncos beat the Jacksonville Jaguars 20-10, the Cincinnati Bengals ran out 32-14 winners against the Philadelphia Eagles and the Green Bay Packers secured a 21-13 victory against the Houston Texans at snowy Lambeau Field.