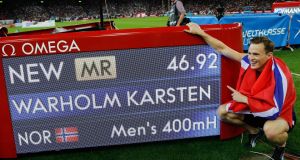 Norway’s Karsten Warholm poses next to the screen reading the new European record after winning in the Men’s 400m Hurdles during the IAAF Diamond League meeting in Zurich. Photograph: Stefan Wermuth/AFP/Getty Images

Another sensational race over 400 metres hurdles helped drag Thomas Barr to a sixth place finish at the IAAF Diamond League final in Zurich in his second fastest time of the season.

Up front Karsten Warholm from Norway extended his unbeaten run of 2019 with the second fastest time in history – his winning time of 46.92 seconds only bettered by the world record of 46.78 set by the American Kevin Young when winning the Barcelona Olympics back in 1992.

Not far behind was the American Rai Benjamin in 46.98 – the first time in athletics history two men have dipped under 47 seconds in the same race. Such is the quality of the 400m hurdles at the moment.

Barr earned his spot in the Zurich final by virtue of his consistency all season, and he proved that again when nailing sixth spot in 49.17 seconds, just shy of the 49.11 season best he set in Oslo back in July.

Four weeks out from the World Championships in Doha it’s evidence too that Barr is rounding back into his best form after missing several weeks with a calf muscle injury, which ruled him out of the national championships. Last Saturday in Paris, the 27-year-old finished seventh in 49.32.

That race was also won by Warholm in 47.26, the reigning world champion also running a then European record of 47.12 in London, before smashing that 47-second barrier in Zurich, a record on five counts, including, naturally, a Diamond League record too. Kryon McMaster of the British Virgin Islands took third in 48.58, while Barr got the better of the other American TJ Holmes (50.00) and local Swiss favourite Kariem Hussein (50.04).