Tarnished Giro d’Italia history not one we should forget

No cycling race, with the possible exception of the Tour de France, is more tarnished by its shady past than the Giro 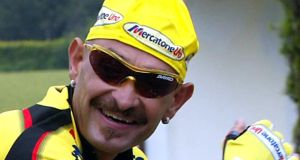 The late Italian cyclist Marco Pantani: became hopelessly addicted to performance enhancing drugs and, six years after his Giro victory in 1998, was found dead in a hotel room in Rimini. Photo: Franck Fife/AFP/Getty

It probably helps that everything is dressed up pretty in pink, and there is a wonderfully romantic background to the Giro d’Italia that even non-cycling people find fascinating.

Imagine, that without La Gazzetta dello Sport, that famous old Italian newspaper, there wouldn’t be this great cycle race, or indeed that pretty pink jersey?

For some cycling people, however, there is a slightly nagging feeling. It’s alright to be forgiving, but we shouldn’t necessarily be as forgetting, because when it comes to doping, no cycling race, with the possible exception of the Tour de France, is more tarnished by its shady past than the Giro.

The villains include many of this year’s race favourites, paraded through Belfast this week ahead of yesterday evening’s Grande Partenza: such as 2012 champion, Ryder Hesjedal, who last year admitted to doping “more than 10 years ago”, not surprising at all given he was once a lieutenant to Lance Armstrong; or Ivan Basso, the twice former champion, who in 2007 admitted to “attempted doping”, which is apparently just as bad, and resulted in a two-year ban; or Michele Scarponi, the 2011 champion, who in 2007 confessed his involvement in Operación Puerto, and was suspended again in 2012 for his involvement with Michele Ferrari, who even non-cycling people should know by now.

Sitting proudly
Indeed Scarponi was only awarded the 2011 Giro after Alberto Contador, also champion in 2008, was disqualified for doping. And still sitting proudly as winner of the 2007 Giro is Danilo Di Luca, even though he was banned for life, last December, after failing a third doping test, just before the start of last year’s race.

Anyway, all this can be forgiven, as long as we don’t forget. Today with Sean O’Rourke ran a piece out of Belfast, on Thursday morning, which included an interview with Tony O’Neill, one of Northern Ireland’s greatest cycling enthusiasts, who told us that the nice people from Bianchi cycles had even presented the city with the actual bike that Marco Pantani had rode to win both the 1998 Giro and the Tour de France.

“It must be one of the most iconic bikes in the world,” said O’Neill, forgetting to mention that Pantani is no longer around, having become hopelessly addicted to performance enhancing drugs, and six years after his Giro victory, was found dead in a hotel room in Rimini, having consumed €20,000 worth of cocaine in the last two weeks of his life.

Pantani still represents one of cycling’s great heroic-tragedies, his fall from grace meticulously documented in Matt Rendell’s book The Death of Marco Pantani.

What got to Pantani in the end was paranoia, especially about what drugs other riders may be taking, including Armstrong. “It isn’t possible,” Pantani said, “that on all these climbs, he (Armstrong) rides that much faster, given the effort I make.”

In 1951, two years after that famous double triumph, Coppi was riding the one-day Giro di Piedmonte along with his older brother and team- mate, Serse. Towards the end of the race Serse crashed near the Turin velodrome, skidding across the road and banging his head on the pavement. He got back on his bike and rode to the finish.

That evening, after complaining of a headache, Coppi took him to hospital, where his brother died of a cerebral haemorrhage. Four days later Coppi was back on his bike, riding the Tour de France. In 1960, at age 40, Coppi died after catching malaria on a hunting tour in Burkina Faso. French cyclist Raphaël Géminiani, who also caught malaria on the trip, survived.

Coppi is often ‘credited’ for bringing modern “doping” methods into cycling, none of which were actually banned at the time. He was once asked in a television interview did he take any “la bomba” (meaning amphetamine), to which he answered “whenever it was necessary”. When asked when it was necessary he replied “almost all the time”.

Coppi’s extra-marital affair ended up causing far more scandal than any allegations of doping, although eventually all of Italy seemed to forgive and forget, and voted him the most popular Italian sportsman of the 20th century.

Cycling may never fully escape the subject of doping although, no more than track and field, and definitely more than some sports, it has been working hard to clean up its act. It’s just this week, after listening to some of the people who helped bring the Giro to Ireland, you could be forgiven for thinking cycling is now totally clean, when there is a history to this race that is still a little too close to forget.